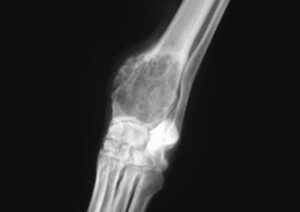 A group of researchers called the Dog Osteosarcoma Group–Biomarkers of Neoplasia (DOGBONe) at the University of Guelph in Ontario, Canada, have joined forces to determine more accurate ways of measuring bone cancer, with the main objective of identifying biomarkers to assess patients with canine osteosarcoma.

The presentation of osteosarcoma in dogs is remarkably similar to that of humans, according to the Ontario Veterinary College (OVC); so much so that computers are unable to distinguish between tumor samples from each species based on gene expression patterns. These similarities make canine osteosarcoma research all the more valuable, as any progress in developing better treatments for one species means progress for the other as well.

“The dogs are a model for the worst of the human disease,” said Geoffrey A. Wood, DVM, Ph.D., DVSc (pathology), of the OVC’s Department of Pathobiology. “Right now, the information we find out in human osteosarcoma serves as a model for the dogs. There’s an opportunity to go both ways between the species, for the benefit of both.”

The group convened following multiple individual partnerships between the researchers. Now, as a formal group collaboration, the researchers have the benefit of maximizing resources through the sharing of osteosarcoma samples.

DOGBONe will explore liquid biopsies (e.g. blood, serum, plasma), as well as other potential signifiers at the cellular level to see if they can find biomarkers for the canine cancer. Through utilizing each researcher’s expertise in separate fields, the team hopes to find ways to connect these biomarkers to the aggressiveness of the disease at the cellular and molecular level and determine what allows some affected dogs to survive longer than others.

One thought on “Canadian researchers team up to fight canine osteosarcoma”