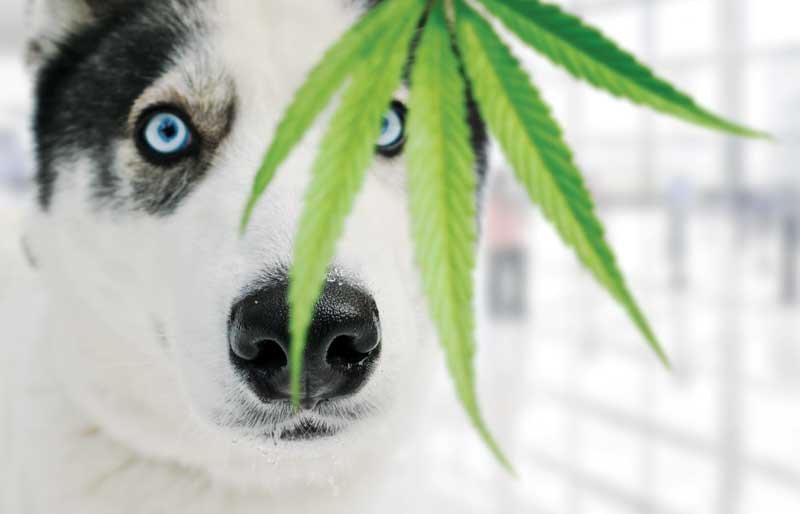 Cannabinoid medicine has received recognition of its benefits in human medicine and resurgent interest in the last two decades. The legalization of medicinal and recreational marijuana has opened the door for the exploration of plant-based cannabinoid compounds and phytocannabinoids as therapeutic agents. Among the phytocannabinoids, cannabidiol (CBD) and delta-9 tetrahydrocannabinol (THC) have received significant interest for managing everything from osteoarthritis to seizure disorders.

However, to appreciate how these compounds and other phytocannabinoids exert their effects, a thorough understanding of the endocannabinoid biome (ECB) is necessary. Poorly understood prior to the early 2000s, this system has since been revealed to be the conduit through which phytocannabinoids act. It also is a critical system for the growth, development, and maintenance of the health of our veterinary patients. This article outlines the key features of the endocannabinoid biome and the roles it plays in the management of clinical conditions in our veterinary patients.

What is the endocannabinoid biome?

Plants of the Cannabis ssp. have been known and used for their fiber and as a source of medicine for more than 5,000 years,1 yet our knowledge of ECB and its role in our physiologic development and homeostasis has only begun to be outlined in the last 30 to 40 years. The evolutionary origins of ECB can be traced back through less evolved species, with elements of this system present in amphibians, terrestrial invertebrates, and worms.2

The ECB is foundational with respect to the growth and development of the body, and a key regulator of its homeostasis. As a consequence, it should come as no surprise that dysfunction of the ECB can lead to significant chronic disease states. To illustrate the many functions the ECB regulates, the following graphic is a synopsis of its known functions.

Given the central role ECB plays in the body’s homeostatic mechanisms, a thorough understanding of this system is warranted to fully appreciate the effects of phytocannabinoids, but also the value they possess in managing many conditions that have historically been challenging.6

The effects of endocannabinoids—and some activity of phytocannabinoids—are mediated through two primary G protein-coupled receptors (GPCR) known as CB1/CB1R and CB2/CB2R.6 Keep in mind that even though CB1 and CB2 are mentioned as the primary mediators through which these compounds act, dozens of receptors from alternate families have been identified, including but not limited to other G-protein couple receptors, vanilloid receptors (e.g. TRPV-1), serotonin receptors (e.g. 5-HT3), and nuclear receptors (e.g. PPAR).3,4

Studies concerning the pharmacologic actions of phytocannabinoids on the ECB have indicated that phytocannabinoids’ affinity for the primary ECB receptors, CB1/CB2,7 is varied; however, it is clear that at least in human patients with pathologic conditions, the expression of CB1 fluctuates, underscoring its critical role in a wide spectrum of biological activities. In animal models of neuropathic pain, neuroinflammation, and brain injury, CB1 and CB2 receptors have been found to be upregulated in peripheral pain pathways, the brain, and cells of the immune system.8 Similar patterns of expression also have been observed in a variety of organ systems, including but not limited to, the GI tract, liver, and cardiovascular system in lab animal and human models of disease.8

You May Also Like  $108,000 donation supports canine health research

The CB1 receptor is primarily distributed in the peripheral nervous system (PNS) and central nervous system (CNS). It is considered to be the most abundant G protein-coupled receptor in the CNS, with highest density in the basal ganglia, cerebellum, hippocampus, and cortex.9,10 However, a detailed analysis of the distribution of CB1 receptors in the CNS and PNS has not been reported in dogs,11 although CB1 receptors have been detected in salivary glands, hair follicles, skin, and the hippocampus.11 Immunohistochemical staining has revealed that CB1 receptors are present in the olfactory bulb, cerebral cortex, cerebellar cortex, hippocampus, basal ganglia, cochlear nucleus, nucleus of the trigeminus, and grey matter of the spinal cord. 11

Multiple forms of the CB1 receptor exist, with expression patterns varying between tissues; however, the different pharmacologic and physiologic properties of the two variants have not been explored.7 CB1 receptors are noted to predominate at the presynaptic neurons where they act through voltage-gated calcium channels that stimulate endocannabinoid production. CB1 receptors can be found concentrated on gamma aminobutyric acid- (GABA-) releasing neurons and glutamatergic-releasing neurons, and can be excitatory or inhibitory based on their location in the brain.12 In one study of neuropathic pain for example, enhanced analgesic effects of cannabinoids were linked to increases in spinal cord CB1 expression,8 since CB1 has been identified to gate the transduction of stimuli into central neuronal pain signals at the level of the spinal cord, while also altering the propagation of pain signals to the brain.5

The CB1 receptor is the primary target for THC, the compound that produces the “high” associated with marijuana. From a pharmacologic perspective, THC has a high affinity for CB1, but another phytocannabinoid, CBD, acts as a negative allosteric modulator of the receptor and has been proposed as a part of the treatment regimen for veterinary patients that ingest THC.

In contrast to the CB1 receptor, the CB2 receptor predominates in tissues of the immune system, in the reproductive tract, and in bone. It also has limited expression in immune cells present in the central nervous system. Clinical studies of cannabinoid receptor distribution also have demonstrated CB2 receptors in layers of canine skin and hair follicles.14 Macrophages, lymphocytes, mast cells, natural killer cells, astrocytes, and microglial cells all demonstrate CB2 expression, and activation of CB2 receptors’ inhibitory effects mediate the anti-inflammatory and anti-hyperalgesia effects in painful inflammatory conditions.3,5 However, the overexpression of this receptor has been observed in pathological conditions, which therefore makes it a promising and challenging target for therapeutic intervention of inflammatory and autoimmune diseases.5 Note the documented psychotropic effects of phytocannabinoids (i.e. THC) are due to the CB1 receptor, not the CB2 receptor.13

You May Also Like  Brain Teaser: A cocker spaniel needs a total ear canal ablation (TECA)

In addition to the widely recognized roles CB1 and CB2 receptors play within the ECB, several other receptors and receptor families have emerged to play ever-increasing importance within this system. The G protein-coupled receptors—particularly GPR18, GPR55, and GPR119—have received much attention. These receptors are triggered through the action of the principal endocannabinoids (e.g. 2-arachidonoylglycerol, anandamide) and have been identified to be involved with immune system activation, management of hypertension, and to have anti-inflammatory properties.15,16

Several additional receptor families also have been identified as possible mediators of pain and inflammation. The vanilloid receptor family—exemplified by TRPV1, along with several receptor subtypes—has been investigated as a promising target for the management of pain,17 while the serotonin receptors, specifically 5-HT3, have been shown to aid in the management of neuropathic pain.18 Peroxisome proliferator-activated receptors (PPARs) are another class of receptors (intracellular) activated by the endocannabinoids that help mediate a variety of metabolic functions,19 including, but not limited to, inflammation, metabolism, and neuroprotection. Taken together, the endocannabinoid system should be considered a complex web of relationships that act locally and body-wide, and plays an important role in managing many chronic conditions.

Two primary endogenous cannabinoids, which act as signaling molecules or “chemical messengers,” are considered to be the primary agonists that interact with the cannabinoid receptors. Anandamide (AEA) and 2-AG are the best studied of these chemical mediators, but are now considered to be two of many other chemical messengers that have been identified as part of the ECB. However, significant differences exist in receptor selectivity and with respect to their levels in different tissues of the body.4

Anandamide is considered to be a partial agonist at both of the major cannabinoid receptors (CB1 and CB2), with slightly greater selectivity for CB1. In contrast, AEA is a full agonist at the TRPV1 receptor at higher concentrations.9 Once bound to its targeted receptor, AEA has been shown to inhibit voltage-gated calcium channels, negatively regulate 2-AG synthesis, and inhibit adenylyl cyclase.7 AEA is degraded by fatty acid amide hydrolase and several other lipoxygenases.

As is the case with the known cannabinoid receptors, the pantheon of chemical mediators through which the ECB acts will almost certainly increase in number, and may present themselves as possible candidates for pharmacologic manipulation, as these compounds are recognized to be present at different levels in normal tissues and in a variety of pathologic conditions.

GI microbiome and the ECB

The enteric nervous system (ENS) extends throughout the GI tract and is widely considered to be the body’s “second brain.” The ENS is an important link that senses changes in the gut environment and communicates them to the brain. It uses the same receptors, signaling molecules, and cell types found more widely throughout the central and peripheral nervous systems. Within the ENS, the cannabinoid receptors regulate motility, secretion, sensation, emesis, satiety, and inflammation. Studies of the cannabinoid receptors in the canine GI tract have even suggested gut microbiota may regulate the expression of CB1 on enterocytes, which may, in turn, control gut permeability.20 As the role of the GI microbiome becomes clearer with respect to the functioning of a body as a whole, our understanding of ECB’s role will likely expand.

With the recent interest and rapid growth of the cannabis industry, our clients are seeking knowledge about the practical applications and effects of phytocannabinoids on our veterinary patients. An understanding of the ECB is the first step toward developing a foundation in cannabis science. This system plays an integral role and is a part of physiology that has gone unrecognized for so long that little information about it is taught in most veterinary curriculums. As a consequence, a basic understanding of this system is necessary to appreciate how phytocannabinoids exert their effects in the body, thereby enabling the clinical practitioner to act as the main conduit for reliable information about the potential benefits of phytocannabinoids in veterinary medicine.

Joshua Sosnow, DVM, is the chief medical officer of CompanionCBD, a producer of CBD-based products. He has been a practicing veterinarian in small-animal medicine and surgery for more than 18 years and is the owner of North Scottsdale Animal Hospital and Desert View Animal Hospital. Dr. Sosnow can be contacted via email at josh@companioncbd.com.