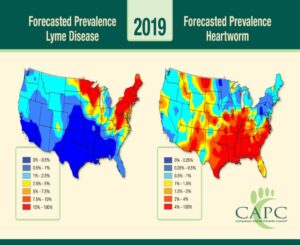 The Companion Animal Parasite Council (CAPC) predicts in its newly released parasite forecast that heartworm occurrence will be higher than average this year .

“We started providing our annual forecasts over eight years ago because of the dynamic and ever changing nature of parasites,” says CAPC executive director, Christopher Carpenter, DVM. “Over the years, we have seen these diseases continue to move. Our annual forecast will alert pet owners to the risks this year and remind them our pets need to be tested and protected year-round.”

The council’s forecast predicts these areas are the riskiest for parasite-related diseases:

To monitor the activity in your county throughout the year, click here.