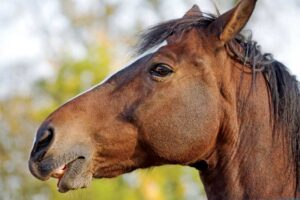 Although it does not dominate the equine health headlines in the same manner it did nearly two decades ago, West Nile virus (WNV) is an ever-present threat, and one about which veterinarians should remind horse owners to be vigilant. For example, last year, health officials confirmed 31 cases of WNV in Ohio, which was more than twice as many cases than in 2017. Even in California, with its arid climate, approximately 20 cases per year have been reported since 2009.

What is West Nile virus?

Isolated in Uganda in 1937, West Nile virus was first detected stateside in 1999 in the New York City area. WNV is a member of the flavivirus genus and belongs to the Japanese encephalitis antigenic complex of the family Flaviviridae. After its introduction, the virus subsequently spread throughout the U.S. and Canada via mosquitoes, infecting birds, humans, horses, and other animals in the process. The virus’s morbidity is perhaps unappreciated; as of 2015, more than 27,000 horses in the U.S. have been infected since the disease was first identified. WNV also is the leading cause of mosquito-borne disease in the continental U.S.

WNV virus is maintained in the wild bird population and spread between birds by mosquitoes. High levels of WNV circulate in the bloodstream of birds, making them the virus’s natural reservoir. When mosquitoes feed on infected birds, they acquire WNV in blood meals. They then pass it on to other birds, animals, and people. Neither horses nor humans are thought to be a reservoir of infection to other animals. It does not appear mosquitoes feeding on an infected horse or human can ingest enough of the virus to transmit it to other animals or humans. As such, horses and humans are considered “dead-end hosts.”

After having been bitten by a mosquito, not all infected horses show clinical signs, which can vary, including in severity. The more severe signs result from encephalitis. Clinical signs include:
• Anorexia and depression, akin to clinical signs resulting from infection with influenza viruses
• Fever
• Muscle and skin fasciculations
• Drooping lips and/or lip smacking
• Teeth grinding
• Hypersensitivity to touch and/or sound (hyperesthesia)
• Changes in mental status—horses affected with WNV may appear distracted or as if they are daydreaming
• Somnolence
• Aimless walking, including walking into and/or pushing objects, walls, posts, etc., often with no apparent control
• Weakness and/or ataxia, either symmetrical or asymmetrical
• Recumbency (inability to rise)

You May Also Like  In the Navy: How veterinarians are keeping military-trained mammals healthy

Horses showing signs of abnormal neurologic behaviors should be tested to determine and rule out various neurologic diseases. However, horses infected with WNV may have clinical signs that can be confused with equine herpesvirus-1 (EHV) or “rhinopneumonitis,” equine protozoal myeloencephalopathy (EPM), eastern equine encephalomyelitis (EEE), western equine encephalomyelitis (WEE), and of course, rabies (with its significant zoonotic potential).

The WNV IgM capture enzyme linked immunoabsorbent assay (ELISA) test is a specific test that detects acute WNV infection in animals. It can determine a positive result within six days postinfection; a positive test indicates a recent infection has occurred. ELISA tests can remain positive for up to two months after infection. Vaccination does not cause cross-reactivity on diagnostic tests; animals that have been vaccinated against WNV and have not been exposed to the virus will test negative on the WNV IgM capture ELISA test.

At this time, there is no specific treatment for WNV. Treatment is, at best, supportive. It includes the administration of anti-inflammatory drugs to control fever and inflammation, and intravenous fluids to maintain hydration and metabolism. If WNV-infected horses become recumbent, they appear to be at a higher risk of dying and are more likely to require euthanasia. Many horses infected with WNV recover fully; however, the overall case fatality rate is approximately 30 to 40 percent in affected horses.

Within a few years of WNV spreading to the U.S. and Canada, several vaccines were introduced: there are currently four vaccines approved for control of WNV in horses. They have proven to be effective tools for the prevention of WNV—the number of infected horses has declined in recent years, likely due to a measure of herd immunity from vaccination. Nevertheless, the disease is an omnipresent threat to unvaccinated horses. Naïve horses should receive two vaccines, four to six weeks apart. Annual revaccination is generally recommended, although in areas with high mosquito populations, two boosters per year—one in the spring and another in the fall—may be recommended. Following vaccination, complete protection takes several weeks to develop.

You May Also Like  Adventures in post-millennial veterinary record-keeping

Environmental measures should be taken to limit mosquito exposure to horses (and owners). Such measures include:

• Maintaining good hygiene in waterers, such as regularly dumping, cleaning, and refilling water buckets and troughs (at least weekly)
• Stocking water tanks with fish that consume mosquito larvae; local authorities on mosquito control may be able to provide assistance
• Using mosquito dunks. These products contain Bacillus thuringiensis subspecies israelensis (BTI). Found in soil, BTI is toxic to mosquito larvae, but not animals. One tablet lasts about 30 days and treats approximately 100 sf of surface water. It is available at many hardware and home repair stores
• Restricting animals’ access to pastures at times when mosquitoes most commonly feed, typically early in the morning and evening
• Using mosquito repellents approved for equine use

While not as prevalent as in previous years, WNV remains a significant threat to equine health. The American Association of Equine Practitioners (AAEP) considers vaccination for WNV to be a “core” vaccine. With significant mortality in affected animals in all parts of the U.S. and Canada, equine practitioners should advise their clients to vaccinate horses against this disease at least annually, and possibly more frequently in areas with high mosquito populations.