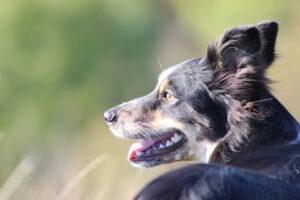 The U.S. Food and Drug Administration (FDA) has approved a tablet to treat noise aversion in dogs.

Manufactured by Boehringer Ingelheim Vetmedica, Pexion (imepitoin) is administered twice daily starting two days before an expected noise event and continued through the event. The tablets will be available by prescription only.

Dogs with noise aversion are sensitive to loud sounds and may show their distress by hiding, vocalizing, panting, shaking, or trembling. They may also vomit, urinate, or defecate. Further, some dogs may damage furniture, doors, dog beds, or other items in their surroundings.

According to the FDA, the effectiveness of Pexion was evaluated in a study of client-owned dogs who previously demonstrated noise aversion behaviors in response to fireworks.

The dogs received either Pexion or a placebo twice daily for two days before being exposed to fireworks. The owners evaluated their dogs’ responses to the noise at four preset intervals and scored the level of 16 different behaviors. The overall score for the dogs receiving the tablets were lower (better) than those receiving the placebo.

The FDA warns certain drugs used to reduce anxiety, such as Pexion, may lead to lack of self-control of fear-based behaviors and may therefore result in a change in aggression level.

The owners of three of the 90 dogs who received Pexion in the trial reported their dogs became aggressive, including growling at a young child and lack of restraint or self-control toward other dogs.