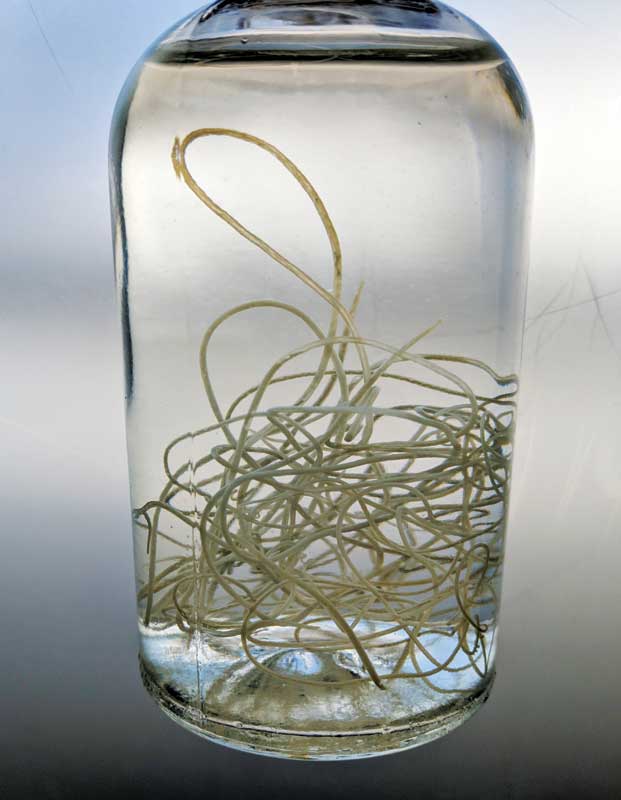 Heartworm in dogs is a global problem and is well documented in South America, Southern Europe, Southeast Asia, the Middle East, Australia, Japan, and North America. In the U.S., it was originally found in the southern states, but now has a much wider distribution and has been found in all states.1 It is caused by the nematode parasite, Dirofilaria immitis, and various mosquito species are the primary vectors. The domestic dog and wild canids are the main hosts; however, infection occurs in cats and has been reported in other mammals, but rarely in people.

All aspects of heartworm have been studied extensively around the world and we now have a much greater understanding of its epidemiology, prevention, diagnosis, and treatment options. Simply put, the disease does not go away—as climate changes occur and population density alters, new areas become infected. As such, we need to continue to educate our clients on the importance of prevention, early diagnosis, and successful treatment protocols. There is concern COVID restrictions may have resulted in interruptions of preventive medications and some treatment protocols, which has spurred the American Heartworm Society (AHS) to publish guidelines (bit.ly/3cwumnG) to support decision-making at this time. This article is a reminder of why we make the recommendations we do for this endemic disease.

Prevention is always better than allowing a disease to occur and then treating it. We are fortunate to have good preventive medications for heartworm, along with knowledge of the importance of mosquitoes in transmission of the disease. The following paragraphs discuss current recommendations for prevention of heartworm and explain which stages are being targeted in the life cycle of Dirofilaria immitis.

The first three stages of larvae develop in mosquitoes, hence environmental control of mosquito habitats and use of repellants or ectoparasiticides (e.g. isozoline group) approved by the U.S. Environmental Protection Agency (EPA) are advised as part of a prevention program. Unfortunately, there is still lack of awareness of the mosquito’s role in transmission, which makes educating clients very important.2 L1 and L2 larvae require temperatures of 80 F (27 C) for two weeks to reach L3, which is the infective stage. Thus, infection may be seasonal in some areas; however, current guidelines are to maintain a preventive program all year round for maximum protection because of the prolonged life cycle within the dog. If year-around preventatives are not being used, it is important to be aware it can take six to seven months for adults to mature after infection—preventive plans should reflect this extended maturation period.

A multimodal approach using a combination of repellant or ectoparasiticides and preventive medication has been recommended as the most effective mode of heartworm prevention. There may be unexpected human health benefits to the control of mosquitoes, as human diseases carried by mosquitoes may also decrease.3

The infective L3 molt to L4 over a couple of weeks in the dog and then mature into L5 (immature adults) over a 45- to 60-day period in the muscles before migrating into the blood stream to the heart and pulmonary artery where maturation occurs over four to five months. After approximately seven months, the mature adults produce microfilariae that enter the circulation.

You May Also Like  Regular wellness checks vital for senior cats

Preventatives approved by the U.S. Food and Drug Administration (FDA) belong to the macrocyclic lactone drug group, and kill L3, L4, and microfilariae. These drugs may also be affective against L5 and mature adults with continuous use. Preparations are available as monthly oral medications (ivermectin, milbemycin oxime), topical medications (moxidectin, selamectin), or biannual injectable slow-release moxidectin. While there are reports of lack of efficacy and concerns about resistance developing, the majority can be traced back to poor compliance. Some have suggested the use of an algorithm to document resistance.4

It is important to diagnose infection with Dirofilaria immitis, as we have a treatment option that can result in a complete recovery. Identification and treatment of infected dogs also reduces the number of reservoir hosts. The following provides a brief overview of typical history, clinical, and diagnostic imaging findings.

Dogs usually show no signs of illness until adult worms are present in the heart. Cough related to exercise and exercise intolerance are often the first signs of infection; weight loss, syncope, hemoptysis, and congestive heart failure (CHF) may develop with high worm burdens. If aberrant migration of larvae occurs, there may be unusual presentations such as seizures, blindness, or lameness.

Direct smears and examination for movement above the buffy coat in microhematocrit tubes are not sensitive methods for detecting low numbers of microfilariae. Instead, the preference is a concentration technique such the modified Knott test. It is important to differentiate Dirofilaria immitis from other circulating Dirofilaria (e.g. Dirofilaria repens) using published morphological criteria. Up to 20 percent of heartworm-positive dogs may not have circulating microfilariae, hence the importance of combining microfilaria testing with antigen testing.

Antigen tests detect antigen in the female worm reproductive tract. As such, false negatives are possible when there are only male worms present, when there is a low number of female worms, or when female worms are not yet sexually mature. Specificity of these tests is close to 100 percent and sensitivity > 84 percent, provided at least two mature female worms are present. If a negative antigen test occurs with a positive microfilaria test or a negative antigen test occurs when there is clinical suspicion of disease, heat treatment of the antigen test is provided by some laboratories in case there is blocking of antigens; however, there is concern this may decrease specificity.5 Heat treatment is not recommended as routine.

Noncompliance or change of preventive medications

The current recommendation is that microfilaria testing and antigen testing should be done before starting treatment and then repeated every six months for one year and annually thereafter.

Thoracic radiography is the best method for determining the severity of disease. Typical findings include pulmonary infiltrates and evidence of dilated and tortuous pulmonary arteries. On echocardiography, worms may be visualized within the right heart or in the main pulmonary artery; however, this is dependent on worm burden.

The goal of treatment is to result in a clinical improvement and to eliminate L3, L4, L5, adult heartworms, and microfilariae. Treatment includes complete exercise restriction, melarsomine, macrocyclic lactones, doxycycline, and steroids. Owners must be prepared for the cost, the duration, the prolonged exercise restriction, and the possible side effects of treatment due to reactions to worm death.

This is the only adulticide approved by the FDA. As directed by the manufacturer, it must be given into the belly of the abaxial muscle. The injection can produce acute myalgia, and concurrent analgesia should be considered. Melarsomine has been proven to kill some stages of immature worms. A three-injection protocol has been shown to be most effective at killing adult worms. This regimen includes one injection of melarsomine (2.5 mg/kg) followed by two injections 24 hours apart one month later. Strict rest is essential and will help in prevention of pulmonary thromboembolism, a common sequel to worm death.

Anti-inflammatory doses of glucocorticoids have been shown to have no impact on efficacy of melarsomine and do help control the clinical impact of pulmonary thromboembolism.

Doxycycline is used as an adjunct therapy, as it reduces Wolbachia numbers in all stages of Dirofilaria immitis.6 Wolbachia are obligate gram-negative endosymbiotic bacteria found in many filarial nematodes. Doxycycline has been shown experimentally to be lethal to L3 and L4 stages of Dirofilaria immitis and also has an effect on microfilariae and the normal development of L3 within the mosquito. The current recommendation is to treat with doxycycline prior to adulticide therapy to decrease Wolbachia metabolites and surface proteins, which are released when worms are killed and have been implicated in the pathogenesis of the disease. The recommended protocol is four weeks of doxycycline daily at 10 mg/kg for one month, followed by a month without any doxycycline prior to melarsomine administration.

As it is uncertain whether melarsomine kills all immature stages of the worm, it is recommended the patient is treated with macrocyclic lactones for two months prior to starting adulticide therapy. This treatment can be given at the same time as the doxycycline. If a high microfilariae burden exists, there is a risk of adverse reactions—pretreatment with antihistamines and corticosteroids should be considered as well as exercise restriction.

A very high worm burden may lead to obstruction to blood flow across the tricuspid valve and result in caval syndrome, which can be fatal within days if not managed surgically. Affected dogs present with severe lethargy, pallor, dyspnea, weakness, hemoglobinuria, and hemoglobinemia with a characteristic loud tricuspid valve murmur and jugular pulsation. Worms are retrieved from the heart under sedation/light anesthesia via the right jugular vein using an intravascular retrieval snare or suitable alligator forceps.

Surgical extraction of worms can also be undertaken to decrease worm burden in cases with a significant worm burden visible on echocardiography in locations that can be accessed with suitable extraction equipment.

While macrocyclic lactones with or without doxycycline have been suggested as an alternative treatment protocol for infection, this approach is not ideal, as the time frame to possible elimination of heartworms can result in significant irreversible pathology within the body.

Client education is important, multimodal prevention is recommended, and annual testing should be encouraged. Treatment cost, risks, and exercise restriction compliance should be discussed fully with the owner. AHS’s website is an excellent reference source for guidance, especially in these uncertain times.7,8

Anne French, MVB, MBA, PhD, CertSAM, DVC, DipECVIM-CA (cardiology), MRCVS, FHEA, is head of the clinical sciences department at Ross University School of Veterinary Medicine. Dr. French graduated in veterinary medicine from University College Dublin, Ireland and spent several years working in small animal practice in the U.K. and Zimbabwe before deciding to specialize in veterinary cardiology. She obtained her U.K. and European cardiology qualifications while based as a lecturer/senior lecturer in cardiopulmonary medicine at the University of Edinburgh where she also completed a PhD. In 2012, French moved to the University of Glasgow. In her time there, French was appointed professor of veterinary cardiology, head of the department of small animal sciences, and clinical director of the small animal hospital. She also completed an executive MBA. French has lectured in several countries including Zimbabwe, Australia, New Zealand, and China, and she has broad research interests in small animal cardiology.