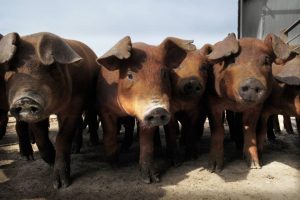 Kansas State University researchers and the Biosecurity Research Institute have banded together to stop the spread of African swine fever virus to the U.S.

The disease was reported in China in August and is positioned to spread throughout Asia and the Caucuses region of Eastern Europe.

If African swine fever enters the U.S., it could cause billions in economic losses to swine and other industries, and devastate trade and international markets, animal disease experts say.

There is no vaccine or cure for the disease, which causes hemorrhagic fever and high mortality in pigs (it does not infect humans).

“African swine fever’s introduction into China, poses an increased threat to the U.S.,” said Stephen Higgs, PhD, director of the Biosecurity Research Institute. “Introduction of African swine fever virus into the U.S. would have an enormous impact on our agricultural industry. Research, education, and training at the Biosecurity Research Institute help to improve our understanding and preparedness for this threat.”

In 2013, the Biosecurity Research Institute became the first nonfederal facility to be approved for work with African swine fever virus, Higgs said. The university projects at the Biosecurity Research Institute are part of research that can transition to the National Bio and Agro-defense Facility, or NBAF, once it is fully functional. African swine fever is one of the diseases slated to be researched at NBAF, which is under construction adjacent to Kansas State University’s Manhattan campus.