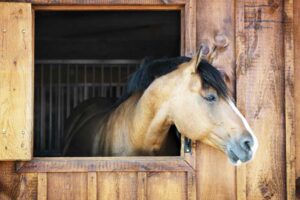 In the late 1980s, a rash of publications stated horses were prone to gastric ulcers. It was a bit curious, actually. Prior to that time, gastric ulceration was essentially unknown. Then, almost suddenly, gastric ulcers were being blamed for a whole host of problems, such as colic, loss of appetite, poor performance, anxiety, poor hair coat… you name it. It was perhaps also curious that, before all the published reports, no one had really noticed some mystery syndrome wreaking havoc on horses. Nevertheless, there it was in print: horses get ulcers. After the initial studies, there was further published research showing an alarming number of adult horses—the majority of them, actually—had gastric ulcers, especially racehorses and various show horses.

Gastric ulcer causes
There are many possible reasons why horses develop gastric ulcers. Most of them are related to how people manage their horses. Here are a few:

Do all horses get ulcers?
It’s somewhat difficult to say what percentage of adult horses get ulcers. If you rely on published studies, one might be inclined to believe gastric ulcers are a somewhat ubiquitous problem. However, it’s also possible published reports of gastric ulceration may simply reflect local conditions in the horses that were studied.

Diagnosing ulcers
There is only one reliable way to diagnose gastric ulceration in horses—endoscopy. However, there are many spurious ways to pinpoint this condition.

1) Clinical signs: Many horses get diagnosed with—and medicated—for gastric ulcers based solely on clinical signs. While not jumping as high, or running as fast, or whinnying as loud might possibly be signs of gastric ulceration, there are many other reasons for such problems.

Medicate and wait
On one hand, it is tempting to simply medicate horses for ulcers when a problem is suspected—some people do. The rationale appears to be that the time taken to put a horse in a trailer and take it to a hospital for examination can be burdensome if the horse is simply medicated, with “success” being determined by a response to treatment.

While the medication is certainly harmless enough, this approach is likely to lead to both overdiagnosis and overtreatment. Crediting improvement after treatment to medication is a logical fallacy: post hoc ergo propter hoc (“After this, therefore because of this”). Under such rationale, it’s likely many horses treated with ulcer medication are being done so needlessly.

What are the best ulcer treatments?
The most thoroughly tested (and most heavily promoted) ulcer treatment is omeprazole, which is absorbed into the small intestine and works systemically by inhibiting stomach acid secretion. The medication is convenient to administer (it’s a paste), has to only be given once daily, and is proven effective. However, there are other treatments that have been shown to be effective and may be less costly:

What about prevention?
Orally administered omeprazole paste has been shown to help prevent gastric ulceration. Happily, lesser doses—half, or perhaps even one-quarter, of a tube—appear to be effective for prevention.

Are antibiotics indicated?
In human ulcers, the bacteria, Helicobacter pylori, can complicate gastric ulcers. However, bacteria have not been shown to cause gastric ulcers in horses.

Use of supplements
There is little evidence any supplement is helpful for managing gastric ulcers. Good management and effective medications are the best treatments.

“Alternative” treatments
There are many other treatments that are proposed to diagnose and treat gastric ulcers. None has been shown to be effective.

Conclusions
Gastric ulcers in horses are fairly easy to identify and to treat. Management also is very important; a few simple changes may be as effective—and less expensive—than long-term medication.