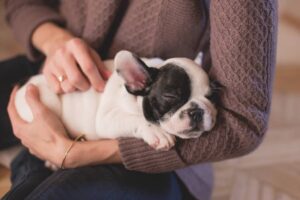 This fall, in a New York borough, a seven-story, 30-apartment shelter for domestic violence survivors—including four-legged family members—opened its doors.

When domestic violence occurs, the abuser often begins with pets in the home. If there’s nowhere for a human victim to run where pets can live, too, what do families do?

They may go nowhere, enduring an abusive relationship. They may turn to a community foster program where pets can have safe harbor for a time.

Hope Dawson of New York has been there.

“We wanted to keep our family together,” she said. “Even if a loving home was found for our dog Coco, it wasn’t our home. And at that point in time, my kids needed Coco so much, and I did, too. But there was nowhere to go with Coco.”

A friend in PALS

PALS Place will be a part of URI, the largest provider of domestic violence services in America. Currently, URI does make some space for people and pets available in other facilities, and that’s where Dawson, her children, and Coco eventually found refuge.

“While it’s great we provide pet-friendly spaces, far more than most cities, there’s clearly an overwhelming need, and our goal is to move toward meeting that demand,” said Nathaniel M. Fields, president and CEO of URI and the Center Against Domestic Violence.

“There are so many positive changes happening,” said Ann Menard, CEO for the National Resource Center on Domestic Violence. “The impact of domestic violence was only first truly recognized in the 1970s, and today we are paying attention to all victims—the entire family—and now we understand how it is all interrelated.”

“Of course, there may be physical signs of animal abuse,” Dr. Merck said. “But think about hidden injuries, such as rib fractures. Another sign not always thought about may manifest in behavior issues.

Arguably, getting involved and speaking out for animals is consistent with the veterinary oath, and more animal health and well-being organizations are getting involved, as well.

Along with URI and Purina, the Human Animal Bond Research Initiative, Bayer Corp., Pet Partners (the nation’s largest nonprofit registering handlers of animal-assisted interventions), and Noah’s Animal House (which provides safety, shelter, and support for the pets of victims in its Las Vegas and Reno domestic violence shelter) have formed a coalition to support the passage of the Pet and Women Safety (PAWS) Act, a bill that aims to expand protection to all survivors of domestic violence, including pets.

Noah’s Animal House and URI are two of the three percent of domestic violence shelters across the country working to keep pets and their owners away from the dangers of domestic abuse. Together, these two organizations have saved more than 1,500 pets from abusive conditions, meaning their owners weren’t forced to choose between staying in an abusive relationship and leaving their pet with their abuser or at an animal shelter.

“When fleeing domestic violence, victims often leave with the clothes they’re wearing and little more,” said Fields. “Having a family pet—especially when there are children—brings something with them that offers continuity and stability.”

“And let’s not ignore pets’ ability to help us to feel better, and even to heal,” Dr. Venator said.

PALS Place isn’t just a building that allows pets—the building itself is being created with pets in mind.

“We’ll offer more than just cute boxes filled toys, pet food, pet treats, a dog and/or cat crate, cat litter, litter boxes, leashes, and collars to all of the dogs and cats. From the ground up, everything is designed in consideration of pets and people living better together, from the flooring to consulting our experts on color palates.”

“Living at URI helped all of us heal—even Coco,” said Dawson. “Coco had become aggressive, and I received help so I could ‘speak Coco’s language.’ Coco changed, we all did. Today, we are all safe. My kids are growing up, I am doing well and, of course, Coco is happy and jovial and the cutest dog who ever existed.”