There are several important things a practitioner needs to know about hyperthyroidism (HT) before treatment is chosen and begun.

Hyperthyroidism is a slowly progressive disease. Although it will become life-threatening, it does not reach this stage for many months. The clinical signs and thyroid test results are both strongly influenced by the stage of the disease (Table 1). Treatment options are also influenced by the stage. (See “When not to treat with radioactive iodine.”)

Although radioactive iodine is considered the “gold standard” approach, each of the four options below has pros and cons. Radioactive iodine is not the best choice for every cat; neither are any of the others. One must assess the cat, the stage of the disease, and the owner before making a recommendation.

Here are some examples: The cost of radioactive iodine is usually a deterrent for most owners of 18-year-old-plus cats.

Methimazole is not an option when the cat reacts to it. Feeding y/d is not a good choice if the cat will not eat it exclusively or the owner will not feed it exclusively.

Surgery is a poor choice for the cat with its systolic blood pressure is over 220 mmHg and/or a heart rate over 250 bpm.

You should assess the cat’s physical condition and pillability, the owner’s desires and limitations (physical and financial), and the availability of a surgeon or radioactive iodine therapy, and then make a recommendation. 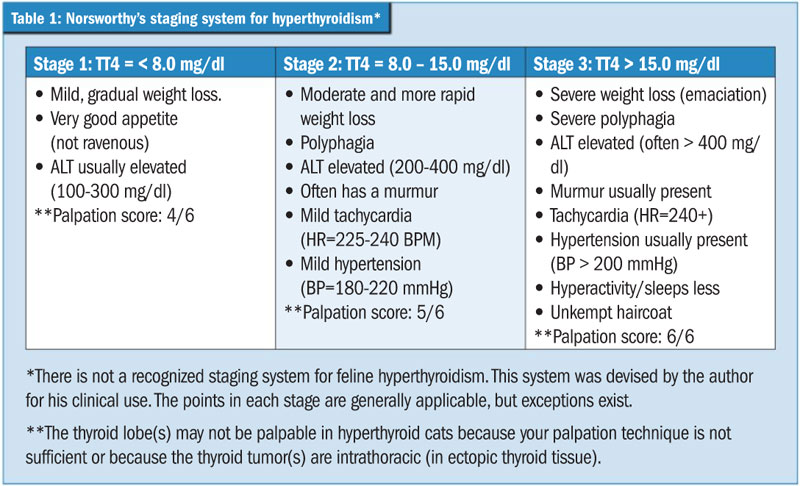 Although the total T4 (TT4) is considered the standard test for HT, the free T4 (fT4) is considered more sensitive, especially in early HT. However, the fT4 is not as specific. Up to 30 percent of sick euthyroid cats will have elevated fT4 concentrations.4 If the cat has symptoms of HT, especially if the thyroid lobes are palpably enlarged, but the TT4 is normal, I suggest doing a T3 suppression test instead of relying on a fT4. (See Table 2.) I have had many cats referred to me for radioactive iodine treatment that were really not hyperthyroid but had elevated fT4 tests.

The classic clinical signs of HT are weight loss (WL) and polyphagia. Chronic vomiting is frequently listed as another common sign. However, chronic small bowel disease (CSBD) (i.e., inflammatory bowel disease and alimentary lymphoma) is far more common than HT, and is often concurrent in cats with HT.

After working with over 800 cats with CSBD and treating more than 1,300 cats with radioactive iodine, I am firmly convinced chronic vomiting is not (or only rarely) a symptom of HT. Rather, the hyperthyroid cat that is vomiting chronically almost always has CSBD and then becomes hyperthyroid. If that is the case, following treatment for HT, the vomiting continues.

When presented with a cat with chronic vomiting that has HT, I recommend an ultrasound study of the small bowel looking for thickening of the small bowel walls. When the walls are thickened, the next diagnostic step is small bowel biopsy. I strongly prefer full-thickness biopsies of at least three locations identified as thickened by visual inspection. At least one biopsy should be in each of the anatomical regions (duodenum, jejunum, and ileum).

However, even if CSBD is diagnosed histologically, it is essential HT be controlled or cured. Otherwise, WL will continue.

Another common mistake is attributing rapid WL to HT. Although HT can cause severe WL, the WL is gradual until the disease is in Stage 3. If the WL is rapid (greater than 1 lb per month) and the TT4 is less than 15 mg/dl, look for another cause of the WL. This search usually takes us back to CSBD.

If IRIS Stage 2 or 3 renal disease is present, the creatinine value at the time of HT diagnosis may be normal or even low normal. When HT is treated (with any of the four options) the resulting normal heart rate and blood pressure will cause reduced (actually normal) blood flow through the kidneys, and underlying kidney disease will be unmasked.

Predicting this occurrence will save a very embarrassing and frustrating event, namely renal failure one to two weeks after euthyroidism is achieved. There is no way to predict it 100 percent of the time, but the methimazole trial or “Tapazole Test” is the best one we have. Methimazole is given to achieve euthyroidism; this may take two to five weeks depending on the level of the TT4. I usually recommend giving it for two to three weeks before the recheck. Renal values (creatinine, SDMA, BUN) are performed at the same time. These values should be about the same values that will occur after radioactive iodine, thyroidectomy, or y/d administration.

I recommend doing a methimazole trial if the TT4 is 15 mg/dl or greater, if the cat is 15 years old or greater, or if you or the owner wants to do it. It is not wrong to do it on any hyperthyroid cat, but the diagnostic yield will be very low for cats with Stage 1 HT.

6) When not to treat with radioactive iodine

This state can be detected by the presence of thyroid stimulating hormone (TSH) in the blood. If TSH levels are detectable, the cat should not be treated, and TSH levels should be determined about every two months until it is no longer detectable. Our protocol is to perform a TSH level on cats with TT4 values of 8 mg/dl or less. Since this is not routinely performed by many radioactive iodine treatment centers, I suggest you perform this test before sending the cat for treatment.

If you are uncomfortable not treating the cat immediately, remember these are Stage 1 cats and HT is a slowly progressive disease. The cat does not become critically ill in just a few weeks.

Some cats with the correct clinical signs are diagnosed when the TT4 is in the high end of the normal range. Although the diagnosis may be correct, it is still important to perform a TSH level before treating with radioactive iodine.

Pre-treatment TSH testing is not indicated for cats to be treated with methimazole, y/d, and thyroidectomy.

There is no feline-specific TSH test. Our commercial laboratories use the canine-specific test. That does not appreciatively affect the results.

Gary D. Norsworthy, DVM, DABVP (feline), started treating hyperthyroid cats shortly after the disease was documented in 1979.5 At the time, the only option available was methimazole. Dr. Mark Peterson was the first veterinarian licensed to treat with radioactive iodine in 19806, and various thyroidectomy techniques were used and modified, one of which Dr. Norsworthy published in 1995.7 The dietary approach was added in 2011. Norsworthy developed a sensitive thyroid palpation technique in 2002 which greatly aided early diagnosis.8,9 His hospital, Alamo Feline Health Center, obtained a license to use radioactive iodine in 2003. Over 1300 cats using this “gold standard” approach have been treated at his hospital, which is one of only four sites in Texas licensed to treat hyperthyroid cats with radioactive iodine.