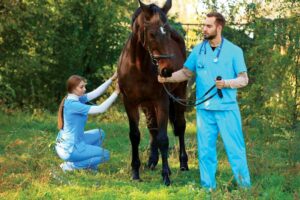 Last July, the principal flutist at the Boston Symphony Orchestra filed a lawsuit alleging it had discriminated against her “by paying her an amount less than other comparable males.” Though she records and performs more solos than the principal oboist (a comparable position in any symphony orchestra), she’s paid 75 percent of what he makes.

When I heard about this lawsuit, my brain veered directly toward veterinary medicine. Of course there’s a wage gap, but surely there’s more to it than that. As the French say, men and women are equal… yet different. No one can deny the biological, the cerebral, and the societal differences separating us.

Our bodies differ, our brains vary, and our culture therefore perceives us in very disparate ways. This, it’s clear, forms the basis for fundamental unfairness when it comes to compensation. Yet, there’s more to it than that. This is what we’ll have to grapple with if we’re going to change things. And change them we must for our profession’s sake.

There’s no arguing the fact of the gap. The 2013 American Veterinary Medical Association (AVMA) Report on Veterinary Compensation shows us that in 2011, female veterinarians in private practice earned a median income of $88,000, while males earned $112,000. In public and corporate practice, we women made $112,000 to their $136,000. Even when corrected for hours worked, years of experience, specialty status, and practice ownership, women made substantially less.

The differences are strikingly similar to the flutist’s and oboist’s. Women consistently make less––a lot less––regardless of how long or how well we work. Worse still is this gap is most pronounced in higher-paying professions, occupations that tend to be the most male-dominated of all. Coincidence? Probably not.

Why we fail female veterinarians

The blame is often put on our culture’s antiquated approach to gender or on women’s inability to advocate for themselves in negotiations. But the fact physicians and financial managers own the professions with the biggest gender wage gaps suggests neither enlightenment comes with education nor are salary disparities necessarily mitigated via negotiation skills.

Instead, the larger wage gap points to financial protectionism, cronyism, and obstinate gender bias as more likely factors in higher-paid professions. Within these professions, pay appears to have less to do with actual ability (work ethic or negotiation skills) than with who you know and whether they resemble you or not.

Still, much is made of male-female psychology when it comes to pay disparities. For example, men are more transactional in their approach to jobs and medicine, while women are more relational. Four key differences in our gender-divided brains seem to support this contention.

Belying this interpretation is the fact a perfectly adequate alternate interpretation advances women may be better at running businesses. After all, multitasking, human resource management, and relationship building are our domain. In an alternate universe where women reigned, this argument would likely be used to explain our natural dominance.

So what’s the real answer to why women make less? It’s not as mysterious as these cerebral explanations would have us believe. Nor is it the fault of women who can’t stand up for themselves. Rather, the unsavory truth is women make less because people in positions of power don’t want us to have it.

We’ve worked hard to explain and quantify these differences and yet we haven’t done much about it. While the wage gap has spawned a much-needed organization—the Women’s Veterinary Leadership Development Initiative (WVLDI)—and has fomented industry-wide discussions, the conversation has lingered on the topic of why and how much, with precious little time devoted to how to solve it.

As a profession that as yet enjoys the self-determination derived from a culture dominated by independent practice ownership, we’re in a position to make changes to our way of doing things with less external influence than other professions. The time is now to level the playing field, before we lose control of our profession to corporate interests.

1) First, recognize the problem. (Admit it: There’s no way the oboist is 33 percent better than the flutist.)

2) Next, identify points of discrimination exemplified by certain pervasive myths:

3) Accept the problem’s deniers and myth-holders come in both genders.

4) Don’t blame the victim. Teaching women to become better negotiators is nice, but concentrating our effort in this direction doesn’t help as well as we think it does.

5) Women in power should mentor other women to take on work that’s self-determining, less reliant on male decisions, and more likely to advance other women’s interests (a.k.a. practice ownership).

6) Men should wake up and recognize the less they pay their female colleagues, the less our profession is paid overall. Ultimately, we set our salaries. So stop thinking of veterinary compensation as a zero-sum game and get to growing the pie instead!

It only makes financial sense. Pay equality isn’t just fair, it’s how we achieve a better workplace, mitigate burnout and turnover, and feed out professional culture positively, benefiting all of us.

Above all, stop harping on how we’re different (of course we are, but who cares?) and start celebrating our sameness. We’re all veterinarians; it is only by lifting each other up and treating one another as equals in ways that matter that we can only build a better profession.