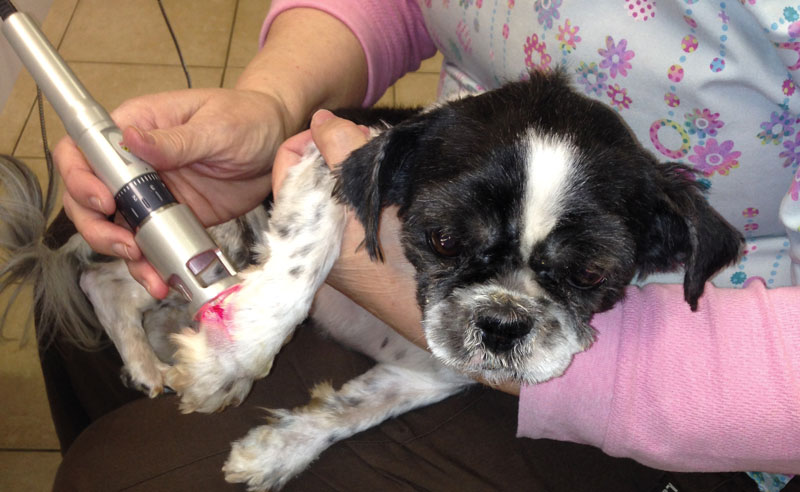 Foot injuries, top photo, dental conditions, center, and arthritis are among the many uses of therapeutic lasers.

Veterinarians are adopting and implementing therapeutic lasers at practices across the country. The therapy's effectiveness is still debated in some quarters — though less so than in the past — so why have they taken the plunge?

The consensus among practitioners interviewed for this story is that the results speak for themselves—the lasers are effective at treating injuries and speeding healing with little to no side effects. And with a relatively gentle learning curve and quick return on investment, they say lasers are a no-brainer for their practices.

Tales from Veterinarians On the Fence

Linda Baty, DVM, of East Brook Animal Clinic in Waverly, Tenn., began offering laser therapy as a low-cost alternative to surgery for such injuries as ligament tears and back problems. “We were faced with keeping dogs on painkillers for the rest of their lives or even putting them down,” she said. “So we were looking for therapy that would relieve the pain and put them back to some function without going through major surgery [such as ACL repairs] if [the client] couldn’t afford that.”

Though she had done a fair amount of research, Dr. Baty was still hesitant.

“It wasn’t until we got the equipment that we realized how much better it was,”she said.

And even after she started offering laser therapy, it took a pivotal moment for her to became a true believer.

A stray dog was brought into Baty’s clinic after being hit by a car. The patient showed signs of a neurological problem, and a radiograph revealed a broken vertebra. The dog had no control over its bladder or bowels and could not stand.

Baty and her staff used the therapy laser on the fracture for 10 days and saw positive results, with a reduction in neurological signs. She then took radiographs of the same area.

“Unless you knew where the break was, you couldn’t have found it,” she said, adding that the dog made a full recovery. “That was my moment.”

James Rumore, DVM, of Acadia Animal Hospital in Crowley, La., had been dealing with Achilles tendinitis for about two years. When Grady Medical sent him a Class IV laser to test, Dr. Rumore applied it to his injury. Within five weeks, he said, the injury cleared up.

“Most of the time we got really incredible results with it,” he said.

He had previously read about the modality in various journals, but found that information confusing. Then he went to a seminar that included a crowd of chiropractors and veterinarians, and felt that it all clicked.

Dr. Bradley uses Erchonia equipment. He started out with an entry-level laser, but upgraded about six months later because “it has wider therapeutic options available,” he said.

Setting a price and getting client buy-in are key, according to the veterinarians interviewed for this story.

“You have to believe in it, so when you look in the client’s eyes, you can tell them, ‘Yeah, it really works well,’” said Dan Core, DVM, of Airline Animal Health and Surgery Center in Bossier City, La.

Dr. Core was an early adopter, purchasing a K-Laser unit in spring 2006.

“It helps that the New York Yankees carry six therapy lasers around with them all over the place,” Core said. The statistic gets clients’ attention.

“It’s just part of our protocol now,” he added. “We wouldn’t know how not to use it.”

Clients at Bradley’s practice are no less receptive to laser therapy than to any other therapeutic plan.

“It has to do with educating clients about what they can and can’t do,” said Bradley. “Inevitably, the question is asked, ‘Can you do this for me?’”

“[Clients] look at us strangely the first time we talk about it, but once they see what it does for their pets, they’re hooked,” she said.

Dr. Roberts looked to her manufacturer representative for help in choosing a price point.

“We tried to price it based on what would be affordable for the pet owner but still provide a good ROI,” she said. Her practice realized a return on investment within the first few months, she added.

Rumore’s practice offers individual treatment sessions for $35 and package deals for $100-$125. For surgeries, he charges an extra $10 for laser therapy and rarely sees clients opt out.

Meanwhile, Baty’s staff decided to price based on the amount of time the laser is used.

Most veterinarians interviewed had already realized return on investment, many within a few months of purchase.

“The neat thing about it is it paid for itself within six months,” Bradley said.

Though many veterinarians initially treated patients with lasers themselves, they all eventually trained support staff to use the equipment.

“The techs do the therapy,” said Baty. “I will sit in occasionally, but for the most part, they do the treatments.”

“It gives your support staff something over which they can feel confident. They have a modicum of control over it and they get to help patients feel better,” she said.

Core’s staff is fully sold on laser therapy, which he said is helpful because his techs and receptionists often spend more time talking to clients than do the veterinarians.

You May Also Like  Boehringer offers tips for Lyme disease prevention

“They’re able to recommend it from the first-hand, legitimate response that they’ve seen on their own pets,” he said.

How Lasers are Being Used

The veterinarians interviewed emphasize that though they have become laser therapy disciples, the treatment isn’t a panacea.

“There are some things I cannot fix with it,” Baty said. “But in a lot of cases, especially with older animals, clients feel like it’s a pain reliever.”

Baty and her staff still obtain a diagnosis for patients, and then essentially write out a prescription for what they want done.

“Some conditions we do two to three times per week,” she said. “Other times, owners might just come in and say, ‘It’s time. He’s starting to get a little slow. Let’s do it.’”

Rumore’s practice uses laser therapy on all surgical cases, along with arthritis, back cases, joint injuries and open wounds.

And for Bradley, laser therapy is often the primary course of action for cases like cruciate ligament or joint injuries.

“We’re able to avoid a lot of surgical intervention,” he said. “We are treating injuries and disease that would have required a prescription or surgery in the past.

“Get off the fence or get left in the dust,” he said. “It’s not going away, it’s just getting better. If you’re not using therapeutic laser, you’re not giving your patients the best service available.”