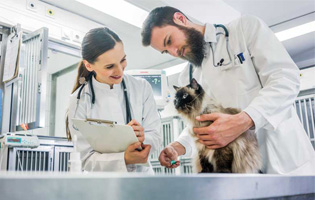 Every year, I do my damnedest to fly up to 35,000 feet so I can take in the immensity of the oceans and the curvature of the planet. But it’s not just Hawaii I’m expecting to see emerge from the clouds. Believe it or not, I’m trying to soak in some perspective. And while what’s happening in the veterinary world may tend to fly below the radar at times like these, it’s never off my screen. Which got me thinking about some the issues I should be writing about. Here are a few:

When it comes to pet healthcare, by far the number-one issue our owners care most about is nutrition. It’s where they can exert the most control over their pets’ health. And it’s where most of them put the bulk of their money, too.

Enter niche nutrition: This is an emerging segment of the pet food market comprised of a wide variety of sellers. Some are small-batch manufacturers that team with nutritionists to produce relatively small quantities of food. Others are local startups selling to pet owners who are interested in fresh, wholesome home cooking for their pets.

This is important not just because you really should know what your patients are eating, but also because an even newer subsegment is vying for your eyeballs, too. Veterinarian-led teams are leaning into the veterinary diet market in the hopes of edging out the big guys with their ultra-niche novel protein diets, flavorful renal fare, and no-middleman strategies.

Keep your eyes peeled for more along these lines. And maybe… just maybe… consider sitting still for a lunchtime minute to hear their pitches.

Cats are not small dogs, as we’re constantly reminded. I can’t help but think, however, that in a parallel utopian universe where dogs and cats were created equal in the eyes of all people, veterinarians would concentrate on only one species of companion animal.

For all their similarities, dogs and cats are, after all, vastly different species with respect to their anatomy, physiology, and pathology. Above all, however, it’s perhaps their psychology that makes the difference in daily life. In practical terms, treating cats in typical veterinary settings is complicated, at best.

The Fear Free initiative’s much-welcome focus on feline perception and reactivity suggests that cat psychology is becoming more of a thing among us. What’s more, some veterinarians are starting to count the dollars cat owners might be spending if cat owners were willing to bring them in more often and veterinarians were willing to work up their cases like they do for dogs.

Given these conditions, can it be long before we start seeing cat-only corporate practices start to pop up?

Don’t worry: No one’s pilfering your stash; your suppliers are getting stingier. Expect backorders, delays, and flat-out unavailability as the pendulum swings back to the left on the opioids again. You might not see it soon, but it’s coming.

It’s not just because of Prince, Tom Petty, and the spilling of fentanyl-laced products onto the streets. It’s also because several popular studies suggest that long-term opioid usage in humans is (unsurprisingly) not as effective as other pharmacological means of managing chronic pain. Which brings to mind babies and bathwater, but there you have it… a surefire recipe for increased regulation on the human side and a dwindling pharmaceutical arsenal on ours.

Clearly, it’s time to get creative—something veterinarians are good at. I predict an increase in the adoption of rehab medicine, a renewed focus on weight loss, greater emphasis on local analgesia, and the use of less traditional medications, such as CBD oils and the like.

All politics is local, they say. And I tend to agree. Though there’s no substitute for the work the AVMA’s Government Relations Division does for us, managing the local politics of veterinary medicine is important work that’s not getting done like it should, in large part because of a lack of new blood in local veterinary medical associations (VMAs).

To be sure, it’s a lamentable problem. But it’s not nearly as problematic as the fact that veterinarians are simply not uniting as they might for anything, much less politics. The one thing that still brings us together is CE. But even this dependable vessel shows cracks and leaks consistent with:

a) Increasingly social media-driven generations, who may value physical participation less, and

b) Fragmentation of the industry into corporate and independent entities. Now that corporate practices segment and unite their own, they may stand to divide and conquer us.

Push back, I say. It’s not like an active social media presence precludes a night of fun times and CE. And it’s not like veterinarians in corporate practices can’t partake in noncorporate CE! (Not that I know of.) But it won’t happen if we’re not aware of what we stand to lose if we can’t organize locally. Join your VMA now!

Before I bought a veterinary practice my practice management colleagues assured me that borrowing money would be easy. After all, we veterinarians are low on the default risk scale.

Unfortunately, I was not to be lavished with sums—not beyond pittances that did little more than lower my once-stellar credit score.

Turns out that even my relatively moderate level of current indebtedness precludes significant lending. Which means that young upstart veterinarians who have spent a decade paying down debt and working to where they have a reasonable cushion nonetheless have few options beyond buying seller-financed practices (like I did). That’s if they can find them.

This will be an issue that stands to challenge indebted generations of veterinarians and the survival of independent practices in general. And on that note…

Regardless of what the fear mongers in the veterinary hoi polloi may say, corporate practices are not coming for us all. If nothing else, they’ve made one thing plain: They’re out for themselves. We’re just an afterthought, a widget, a cog, a pharmacist.

You May Also Like  Gathering vital patient information with ultrasound

Cynical? I’ll concede. But that doesn’t mean it’s not true. We veterinarians have to maintain control over our profession. First came big pet food. Then came big pharma. Now it’s the corporate giants and takeover specialists. Organizing ourselves as independent thinkers, regardless of where we work (corporate, academic, or otherwise), means we have greater leverage over our suppliers and a platform from which to push back when they forget we’re human.

Those were my thoughts as I was launched into the skies last month. The good news is that by the time I did sight dry land, it had magically faded back under the radar and out of sight altogether. But now I’m back. Reality blows.