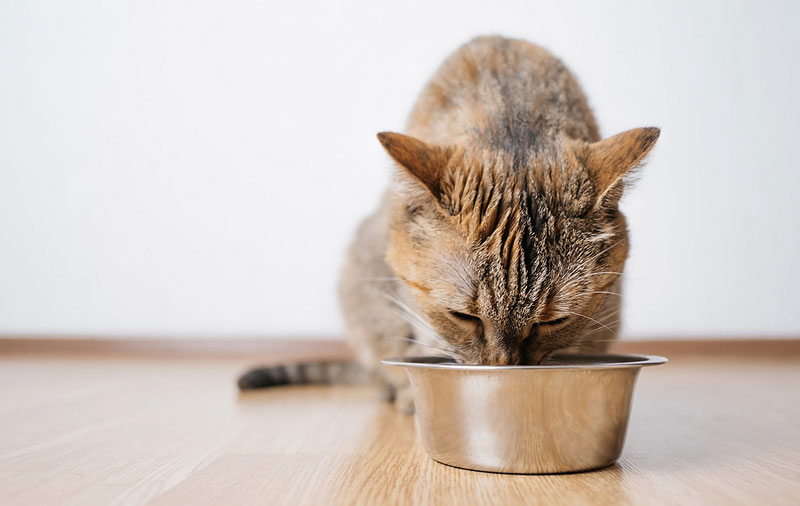 When given the choice between a readily available meal and one that requires a bit of effort, cats tend to take the easy route.

This is according to a recent study conducted at the University of California, Davis (UC Davis). Researchers looked at a group of 17 domestic house cats to learn more about their tendency to contrafreeload (i.e. work for food when equivalent food is freely available).

While a previously conducted study suggested cats were unlikely to forage in this way, investigators theorized that, like most other animals, house cats “would contrafreeload in the home environment when given a choice between a food puzzle and a tray of similar size and shape.”

“There is an entire body of research that shows most species, including birds, rodents, wolves, primates—even giraffes—prefer to work for their food,” says the study’s lead author Mikel Delgado, PhD, a cat behaviorist and research affiliate at UC Davis School of Veterinary Medicine.

Per the study, feline participants were presented with a free food tray and a food puzzle, each containing an equal amount of their regular diet. The puzzle allowed the cats to easily see the food, but required some manipulation to extract it. Cat owners recorded two to four trials per day over the course of three to four days.

The results classified four participants as “willing to contrafreeload;” however, as no cats consumed more food from the puzzle as compared to the free food tray, none were considered strong contrafreeloaders.

“It wasn’t that cats never used the food puzzle, but cats ate more food from the tray, spent more time at the tray, and made more first choices to approach and eat from the tray rather than the puzzle,” Dr. Delgado says.

While the reason why cats prefer freeloading is unclear, researchers do not attribute the behavior to laziness, adding that feline participants wore activity monitors and that even those that were more active opted to eat freely available food.

Additionally, Delgado says the findings should not be interpreted as a dismissal of food puzzles, as previous research shows these can be an important enrichment activity for cats.

The study, which was co-authored by Delgado and Melissa Bain, DVM, MS, DACVB, DACAW, and Brandon Han of UC Davis School of Veterinary Medicine has been published in Animal Cognition.