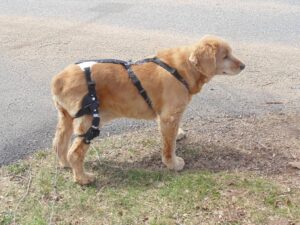 Cranial cruciate ligament (CCL) insufficiency is the most common cause of hind limb lameness in dogs. In 2003 alone, dog owners in the U.S. spent $1.32 billion for the treatment of CCL injuries in their pets. As an important stabilizer of the stifle joint, the CCL’s three main functions are to prevent hyperextension of the stifle, internal rotation of the tibia, and most importantly to prevent tibial thrust in relation to the femur. Once torn, the damaged CCL leaves the stifle unstable and results in chronic, progressive lameness, predisposition to meniscal tearing, and ultimately, the formation of osteoarthritis.

No matter the treatment approach, there will be arthritic changes in the stifle joint following CCL rupture. Surgery will always remain the best option for stabilization of the CCL-deficient stifle, and its goal is to primarily minimize the progression of osteoarthritis. While there are numerous options for surgical management, surgery is not always feasible. Possible reasons for either opting against surgery or delaying the procedure may include concurrent medical issues, pet owner financial concerns, or staging procedures for bilateral CCL insufficiency. One recent study reported that dogs treated surgically and with nonsurgical methods (weight loss, administration of NSAIDs, and rehabilitation therapy) had better overall outcomes compared with dogs that were treated via nonsurgical methods alone.

Recently, the use of canine stifle orthotics has also emerged as a means to nonsurgically manage patients with CCL insufficiency. More commonly used in human medicine, knee braces have been used to enhance proprioception and joint position sense, reduce fatigue and permit the injured limb to relax, and induce slow motion to allow muscles time to react and control, as well as to provide mechanical protection against impact.

At this time, only functional stifle braces are used in veterinary medicine, and these are designed to reduce stifle instability by neutralizing cranial tibial thrust in the CCL-deficient knee. All functional braces to some extent also act as external biofeedback devices in that in addition to the mechanical support provided by the brace, there is a much larger benefit from the increases in proprioception and joint position sense.

A retrospective analysis was performed by Veterinary Orthopedic and Sports Medicine (VOSM) Group in Annapolis Junction, Md., to evaluate weight bearing of patients diagnosed with a unilateral CCL insufficiency while wearing a stifle orthotic using a pressure-sensing walkway. Medical records (Jan. 2005 to Dec. 2012) showed 160 patients had been treated with stifle braces for CCL insufficiency. Ten of those cases were unilateral CCL insufficiency with no other orthopedic or neurologic abnormalities in which long-term objective follow-up was available. All 10 patients were assessed at baseline and presented 90 days or greater post-orthotic placement for re-evaluation (mean, 180 days; range 90 to 540 days). Temporospatial gait analysis was performed using a pressure-sensing walkway at baseline and 90 days or greater postorthotic placement to identify weight bearing with total pressure index percentage (TPI%). TPI of the affected versus nonaffected hind limb with the brace on and off was compared over time. TPI of the affected hind limb with the brace on and off was compared to baseline over time. TPI% improved significantly by 5.1 percent in the affected limb when compared to baseline (p = 0.0020). At final gait analysis, TPI% significantly improved by three percent in the affected limb with the orthotic off when compared to the unaffected limb (p = 0.0020). A validated client survey also revealed overall improvement in terms of function. This study demonstrated that custom canine stifle orthotics allow for improved weight bearing in patients with unilateral CCL insufficiency. Therefore, functional canine stifle orthotics should be considered for those situations as described above that do not allow for surgery or require a delay of surgical intervention. It should be noted, however, a brace is not considered equal to or meant to replace surgery, and it must be worn for the duration of the patient’s life.

In addition to those patients who cannot undergo surgery for complete CCL tear, the question remains, what other conservative treatment options exist for patients with stable partial CCL tears? Indications for conservative treatment of CCL injuries can be established for early partial CCL tears. While it may be possible to rehabilitate these patients back to full function, there is a great likelihood a partial tear may progress to a full tear over time. For dogs with early mild partial tears, strategies are focused on controlling the effects of inflammation (pain, effusion, loss of motion, and muscle atrophy). Ice, photobiomodulation/laser therapy, TENS, and NSAIDs can assist in counteracting the effects of inflammation. Rehabilitation therapy for early partial tears may include various techniques for strengthening of the hamstrings and quadricep muscles, including isometric, isotonic, isokinetic, and eccentric exercises, once pain and inflammation are relieved.

Several studies using regenerative medicine for ligament injury also demonstrate the success of intra-articular bone marrow aspirate concentrate (BMAC) as an effective treatment for early partial CCL rupture. Stem cells are characterized by their ability to self-renew and differentiate along multiple lineage pathways. They contribute to generating new tissue and to angiogenesis, are chemotactic for progenitor cells, supply growth factors, and make extracellular matrix, and are anti-apoptotic, anti-inflammatory, and antifibrotic. Stem cells contribute to the regeneration and replacement of injured and diseased tissue via cell differentiation, modulation of signaling pathways via cytokines to decrease progression of disease, and aid in resident stem cell activation and recruitment. One study investigating the engraftment of bone marrow cells (BMC) following intra-articular injection in dogs with spontaneous CCL injury found that BMCs engraft to the injured CCL as early as three days following IA injection.

At VOSM, we have utilized BMAC-platelet rich plasma (PRP) combination therapy for early partial CCL tears (<25 to 50 percent rupture of craniomedial band) diagnosed via arthroscopy. Culture expanded adipose-derived stem cells with PRP or BMAC with PRP used in conjunction with rehabilitation therapy and a functional stifle brace (for severe cases) have yielded excellent results. CCL healing is confirmed via a 90-day second-look arthroscopy, and improvement is noted using objective gait analysis. This technique has been used in several performance dog patients who have successfully returned to competition after appropriate rehabilitation therapy, demonstrating the ability of these patients to withstand the continued rigors of their sport.

In a recent study, it was shown multiple injections of leukoreduced PRP decreased pain and functional impairment in a canine model of anterior cruciate ligament (ACL) and meniscal deficiency. In this study, patients received five intra-articular injections of leukoreduced PRP over the first eight weeks following ACL transection and meniscal release. It was shown these patients had beneficial effects for ACL repair, including improved range of motion in the knee, decreased pain, and improved limb function for up to six months. The study results could enhance a clinically applicable strategy for use of PRP in treating patients with ACL injuries in the future.

In conclusion, options do exist for the conservative treatment of partial CCL tears and for complete CCL tears for which patients are unable to undergo surgical intervention. Though controlled prospective studies should be completed, these options provide veterinarians and pet owners with alternative considerations.

For detailed information on this topic, watch an in-depth webinar here.