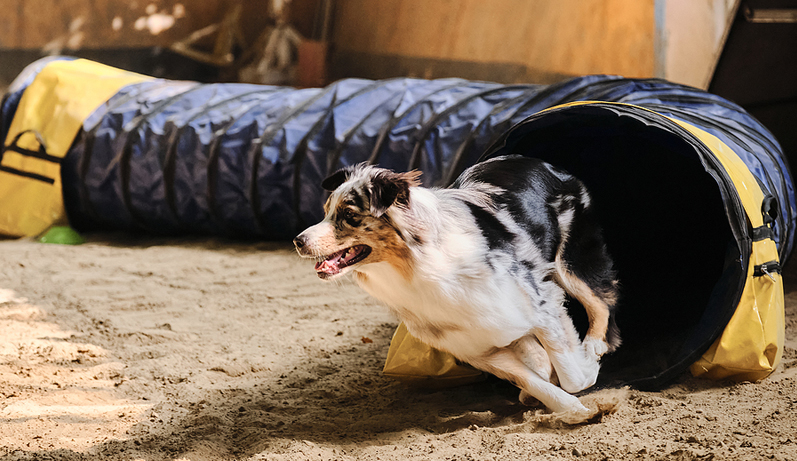 Breed, core strength, and physical activity participation all play a part in an agility dog’s susceptibility to the most common type of canine knee injury.

This is according to a recent survey conducted by Washington State University (WSU) College of Veterinary Medicine, exploring the relationship between agility dog exercise and instances of cranial cruciate ligament rupture (CCLR), the canine equivalent of an anterior cruciate ligament (ACL) tear in humans.

The survey, which documented the activity and injury odds of more than 1,200 canines, found having strong core muscles appeared to lower the risk of CCLR. Additionally, dogs that participated in certain activities, such as dock diving and scent work, also appeared to have decreased rate of ligament rupture, WSU reports.

Conversely, agility dogs engaged in certain other physical activities were found to have increased risk, with those that played flyball nearly twice as likely to rupture the ligament compared to other dogs.

Meanwhile, regular activity (i.e. swimming, playing fetch, walking, running) did not appear to increase the risk of injury, nor lower the odds.

“Balance exercises, wobble boards, anything that improves the core strength of the dog seemed to lower the odds of a ligament tear,” says the study’s lead author and WSU professor, Deb Sellon, DVM, PhD, DACVIM. “We found fitness matters for dogs just like it does for people, and we haven’t shown that before.”

The findings, WSU reports, also confirmed some long-standing risk factors. Specifically, female dogs spayed before the age of one were nearly twice as likely to rupture the ligament compared to those spayed after their first birthday. This is believed to reflect the importance of hormones in developing strong ligaments in young animals, researchers say.

Additionally, Australian shepherds and Labrador retrievers were found more than twice as likely to experience CCLR, while Rottweilers and Australian cattle dogs were more than four times as likely.

“Larger dogs doing agility tend to be less balanced, so it is not surprising a Rottweiler or Australian Shepherd may be at a higher risk of a rupture compared to smaller breeds,” says the study’s coauthor, Denis Marcellin-Little, MS, DVM, DACVS, a veterinary orthopedic specialist with University of California, Davis (UC Davis). “The tail could also be a factor; the tail has been proven very important for cheetahs and you can imagine it has a role to play in the overall balance of the dog.”

“This research decreases uncertainty; it doesn’t bring certainty, but this one study could provoke thoughts and help us look at potential research areas to target moving forward,” Dr. Marcellin-Little says.

The findings have been published in BMC Veterinary Research. For more, click here.