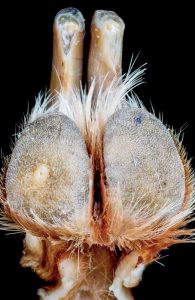 A canine corn is a focal circular area of hyperkeratinization found in the digital paw pads of sighthound breeds (e.g. greyhound, whippet, and lurcher). A prevalence of around five to six per cent in retired greyhounds has been reported in the literature (Lord et al, 2007), making it the most common dermatologic condition among this group of dogs. Approximately 80 per cent of corns occur in digits three and four, while 80 per cent are found in the digits of the thoracic limbs (Guilliard et al, 2010). Their occurrence has not been reported in the metacarpal and metatarsal paw pads. Corns commonly cause lameness, which can be severe. The lesion is analogous to heloma durum (corn/clavus), which usually occurs on the foot in humans (Roven, 1968).

A number of etiologies have been proposed—these include viral infection, foreign body penetration, and repeated mechanical trauma (Swaim et al, 2014). In humans, corns are thought to have a mechanical etiology, developing due to chronic repeated trauma from a variety of extrinsic (e.g. ill-fitting shoes) and intrinsic (e.g. bony prominences, faulty foot function) factors (Yale, 1987).

Many forms of treatment have been suggested, however, none offer consistent, long-term results. Further, recurrence is common. Currently, there is little to no evidence base on which to make a treatment decision. The following review is a summary of the current evidence regarding greyhound corns, as well as the authors’ experience and opinions.

While a viral aetiology is commonly thought to be the cause of corns, studies have been unable to show any relationship. For example, a study of six greyhounds (Balara et al, 2009) failed to identify papillomavirus in any surgically excised corns using polymerase chain reaction (PCR), histology, and immunohistochemistry. This is further supported by the failure to identify any positive result for canine papillomavirus in more than 100 corns submitted for testing (unpublished data, Doughty and Guilliard). Ultrastructural studies using electron microscopy to identify virus particles have been negative (Swaim et al, 2004). Recently, Anis et al, 2016 identified novel canine papillomavirus using PCR in four corns from two unrelated adult greyhounds. However, this study did not show the identified virus was localized in the lesion, and therefore, the possibility of it being a non-pathogenic commensal could not be ruled out. A viral/infectious etiology is unlikely to be the cause of the majority of corns in greyhounds.

The theory that foreign body penetration can result in corn formation through either the presence of a foreign body, the introduction of pad tissue into the subdermal tissues, or from the formation of scar tissue is unlikely. In the author’s (Guilliard’s) clinical experience, no foreign body has been found macroscopically during excision surgery. Surgical removal of glass from the subdermal pad tissue has never resulted in subsequent corn formation in cases seen by the author (Guilliard). Further, histological examination of more than 800 surgically excised corns has failed to identify a foreign body as the primary etiology. Stone-like material, along with a small amount of fluid after removal of the corn core, is occasionally seen. Histological analysis of this material typically shows fragments of vital and/or necrotic bone that are likely due to the calcareous degeneration of an underlying mechanically induced (adventitious) bursa. While foreign bodies have been reported to cause heloma durum in humans, its occurrence is thought to be rare.

A mechanical etiology, specifically repetitive mechanical trauma, has often been suggested as the most common cause of both human and greyhound corns. This is supported by observations made in veterinary practice, as well as translating evidence from data and experience of heloma durum in human medical practice.

Concomitant anatomical deformity has been seen in 40 per cent of cases (Guilliard et al, 2010), with damage to the deep digital flexor tendon being the most common. It is rarely a complete rupture, but rather an elongation of the tendon presenting as an elevated nail when the limb is held in extension, altering the pad’s weight-bearing area.

Supporting these clinical findings, microCT imaging and histological examination of amputated toes with corns have shown a large number with tendinopathy-like changes, including tendinosis, tendinitis/partial rupture, paratenonitis, and paratenonitis with tendinosis (Figure 1). Histologically, these appear as collagen disorientation, disorganization and fibre separation, focal necrosis and calcification, and neovascularization.

You May Also Like  Farewell, and my best management advice

Altered weight-bearing is one example of how mechanical factors can play a part in the formation of a new corn. Consider a greyhound that presented with a recurrent corn on digit 3—the veterinarian performed surgery to amputate the digit through the metatarsal/phalangeal joint. Subsequently, the superficial digital flexor tendon of digit 4 ruptured and the digit became flat. Corns then developed in digits 2 and 5, rapidly recurring after surgical excision (Figure 2). However, it has been reported that if a pad’s weight-bearing aspect is altered surgically by a distal ostectomy (i.e. amputation), the corn naturally regresses (Guilliard et al, 2010).

While the reason for the exclusivity of corn formation to sighthounds is still not fully understood, one proposal is it may be due to this breed having less subdermal fibro-adipose tissue compared to others, thereby increasing the risk of mechanical trauma (Swaim et al, 2010). The significance of dog racing is uncertain, as corns have been reported in both racing and non-racing greyhounds and whippets. Some have suggested hereditary factors may be involved in the susceptibility of this lesion, as it has been noted some dogs from the same dam or sire have developed corns. Currently, there is no evidence to support or refute this.