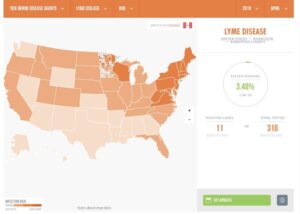 Health-care providers can now use dogs as a way to measure human risk for Lyme disease, according to a study by Companion Animal Parasite Council (CAPC).

“This research shows how man’s best friend continues to safeguard humans as a sentinel to alert humans where they are at greatest risk for Lyme disease,” says CAPC executive director, Christopher Carpenter, DVM. “The model established in this research breaks new ground to give residents, travelers, and health-care providers a county-level map to help them identify areas of risk across the country.”

Through the study, researchers quantified the relationship between canine seroprevalence for the disease-causing bacterium, Borrelia burgdorferi, and Lyme disease in humans. Seroprevalence is used to calculate the number of dogs testing positive among all tested dogs within a county. The study showed a correlation between human incidence and dog seroprevalence.

According to researchers, they were able to study more than seven years of nationwide canine diagnostic data as a result of dogs being tested annually for exposure to Borrelia burgdorferi. The collected data represented more than 400 million data points, which is usually difficult to obtain when looking directly at ticks and the environment.

Other benefits for basing a study on canine seroprevalence include:

One thought on “Dogs can alert human risk to Lyme disease”