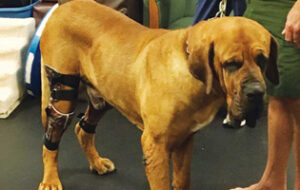 The message was from a colleague, a veterinary surgeon who was referring a Tosa Inu to Georgia Veterinary Rehabilitation Fitness and Pain Management, my rehabilitation-only practice outside Atlanta, for bilateral CCL tears. The owners had declined surgery for Mei Mei, a very lean 8-year-old 160-pound intact male who lumbered into my office with a significant limp in his left hind leg and short striding in the right hind. After confirming what my colleague had found—bilateral cranial drawers, medial buttressing, effusion, and a significant click on the left side—I discussed how to treat a torn CCL with the owners. As a board-certified rehabilitation specialist, I am the first person to recommend nonsurgical treatment for cases in which it is indicated, and in my opinion, this was not one of them. I have had great success treating torn CCLs conservatively in dogs less than 30 pounds or less active, older, and generally smaller dogs. Although not an active dog, Mei Mei certainly wasn’t small. However, Mei Mei’s owners were moving out of state in 11 days to an area with dozens of acres. He had not healed well from a mass removal on his hip the month prior and had chronic skin infections. Surgery was out of the question.

Owners may decide against surgery to treat a CCL tear for many reasons—cost, anesthesia risk, doubt over keeping the dog contained for eight weeks post-op, age, wanting less invasive treatment, and more.

A TPLO costs $3,500 to $5,000, which many owners simply can’t afford but would be willing to consider if were less expensive. At this point, I offer the names of two local general veterinarians who will perform the lateral suture/extra cap procedure for $1,200 to $1,500, which for many is within reach. However, post-rehab is critical. In one study, whether a patient received an extra-capsular or a TPLO procedure, as long as the dog had specific directed physical rehabilitation afterward, the results up to 24 months post-op were the same in strength and OA scores (AU, et al, Veterinary Surgery, 2010).

The risk of anesthesia is a real concern for many dogs due to heart conditions, previous bad experiences with anesthesia, etc. These cases do need to be treated nonsurgically.

Often, owners who doubt their ability to contain their dog for eight weeks seek our help with nonsurgical treatment, thinking it’s easier. Unfortunately, the opposite is true. Surgery and rehab often will have them back to early off-leash work at eight weeks post-op and, if intense enough, back to full activity in three months. The nonsurgical option usually takes much longer. The dog must be contained for at least two to four months, possibly six to 12 months. What is often most frustrating in these cases is that the CCL can tear partially, receive rehab, the dog is doing well, and he returns to full activity, and then he tears it further, returning almost back to square one. Once owners learn this and that they can walk their dog as long as 15 minutes several times a day by week three, they usually opt for surgery. Also, the likelihood for tearing the contralateral side is much higher the longer they are limping. As the nonsurgical option takes longer to soundness, I see far more CCL tears in the other limb in these cases.

Many nonsurgical options exist for dogs treated for CCL tears. In cases like these, it’s important to consider the affected stifle(s) and the end goal. First, address the swollen, painful, and unstable joint. Mei Mei already was taking an NSAID with little to no improvement. This is the reality most of the time, but I usually keep patients on an NSAID, as it’s decreasing joint inflammation and possibly slowing the arthritic process. 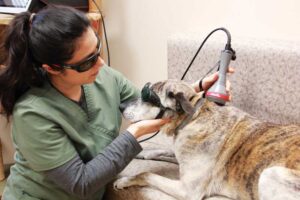 Other options for addressing inflammation include a high-dose EPA/DHA (50-100mg/kg), although studies indicate this dosage can be increased.
I may suggest a glucosamine supplement and/or PSGAG injectable, as well as something to reduce oxidative stress. Acupuncture with laser therapy is the most helpful for immediate relief. I started Mei Mei on a regimen of acupuncture, class IV laser at each stifle (back and neck), and an omega 3. When he returned six days later, his owners reported an immediate improvement in his gait, attitude, and energy level.

You May Also Like  Needles and Nociception: How Acupuncture Helps Modulate Pain

The role of orthotics

Stabilizing a joint can prove difficult, but at least one study shows that a stifle orthotic can increase weight bearing in the affected limb (Carr, et al, Veterinary Evidence, 2016). A brace also can reduce return-to-activity time. There is debate over how much drawer one is controlling with any orthotic, but a more fitted plastic brace like one custom- made for a patient by a veterinary orthotics company will reduce more drawer than a softer brace. However, one study in humans found that any kind of brace—even an ace bandage—allowed people to walk better and feel more secure (Palm, et al, Knee, 2012). One thought is that just by increasing proprioceptive input to the leg, the patient will walk better, which I can corroborate. I have seen several dogs fitted with a softer brace, such as the A-trac by wound wear (woundwear.com), who improve their gait status immediately. Clients can find it cumbersome to use, but it does not require casting and can be less expensive than most plastic fitted braces.

I recommend clients quickly accustom their pet to wearing the brace while watching for hot spots and leave it on all day for at least the next two to four months while working on strengthening. Ultimately, strengthening is the most important aspect of treating the nonsurgical cruciate case. Making the stifle feel more stable and comfortable is strengthening the soft tissues around that stifle and giving the body time to build scar tissue while hopefully not losing too much range of motion.

While the patient starts a regimen of acupuncture, laser treatment, supplements, and anti-inflammatories, the owners begin a walking and exercise plan with their pet at home, beginning with a 5- to 10-minute session once or twice daily. I review the exercises with owners but advise them to work with our rehab-certified therapists for greater effectiveness. At least two in-clinic sessions per week begin at this time, as well. The severity of the limp determines the extent of the exercises. If the patient is still very weak, I begin alternating underwater treadmill and land sessions with the therapists so the dog has one of each per week. If it can handle more, I schedule mixed rehab sessions that include water and land work. It is important to work on strength, range of motion, and proprioception for these cases, all things that will diminish with the ligament tear and may not return fully if not specifically addressed. In addition to clinic sessions, the dog cannot run, jump, or play—no high-impact activity at all.

You May Also Like  Anesthetic malignant hyperthermia in greyhounds 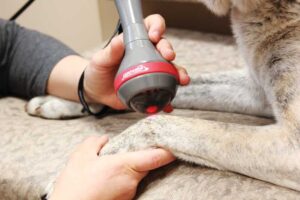 Georgia Veterinary Rehabilitation Fitness and Pain Management treats nonsurgical CCL tears the same as post-op tears, at least for the first eight weeks. When faced with a torn CCL, surgery is always my first choice in most cases. However, with physical rehabilitation, inflammation and pain control, and time, I see good results without surgery. Mei Mei left for Michigan, but was looking and feeling much better in less than two weeks after two acupuncture and two laser sessions, as well as a high-dose omega 3 supplement. His limp had gone from a 3-4/5 to a 2/5 even before he had been fitted with braces.

For detailed information on this topic, watch an in-depth webinar at litecure.com/companion

Progress in reclaiming a profession in crisis
Join Now!
3