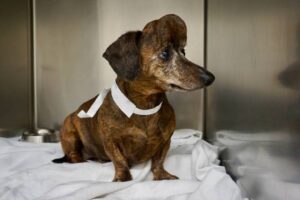 A veterinarian from the Ontario Veterinary College (OVC) has replaced part of a dog’s skull with a 3D-printed titanium plate after removing a tumor that was weighing down her head.

According to OVC’s website, the surgery is a veterinary first for North America and opens up the possibility of 3D printing being used in human applications.

“This is major for tumor reconstruction on the head, limb prosthesis, developmental deformities after fractures, and other traumas,” said Dr. Oblak in an article by OVC.

“In human medicine, there is a lag in use of the available technology while regulations catch up. By performing these procedures in our animal patients, we can provide valuable information that can be used to show the value and safety of these implants for humans. These implants are the next big leap in personalized medicine that allows for every element of an individual’s medical care to be specifically tailored to their particular needs.”

To get the custom implant to fit perfectly in place, Oblak turned to OVC’s rapid prototyping of patient-specific implants for dogs (RaPPID) working group to map the tumor’s location and size. 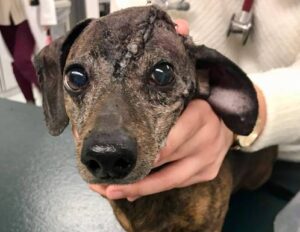 She also worked with an engineer from Sheridan College’s Centre for Advanced Manufacturing Design and Technologies to create a 3D model of Patches’ head and tumor to ‘virtually’ perform the surgery and see what would be left once it was removed.

During the surgery, approximately 70 percent of the top surface of the dog’s skull was removed.