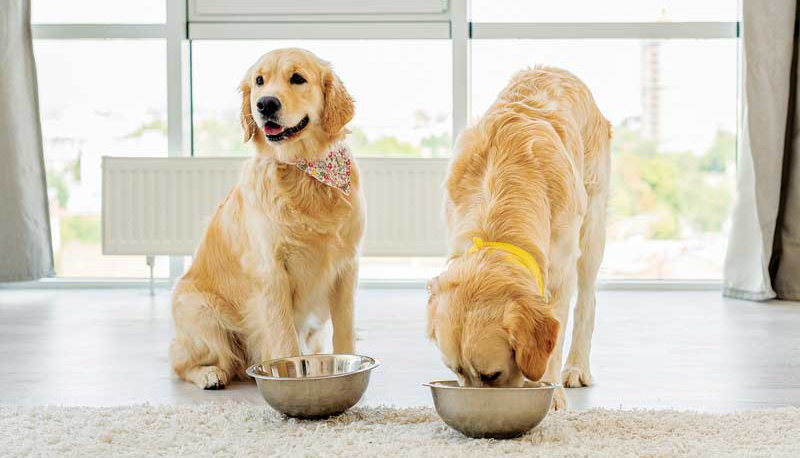 I have written previously in this column about the controversial subject of raw diets for dogs.

The bottom line, based on existing evidence, is there are no proven health benefits to these diets and several well-documented risks, including infectious disease and nutritional inadequacy.1

Proponents of these diets offer varied theoretical arguments for why they should be healthier than commercial cooked foods. Many are simply fallacious claims about what is “natural” or “ancestral.” However, there are some plausible, but unproven hypotheses, about the potential negative health impacts of conventional diets or the possible health benefits of feeding uncooked meat.

Concerns about Maillard reaction products (MRPs) in cooked foods, for example, are reasonable given the potential carcinogenicity of some of these compounds at some amounts in some species. However, it is far from evident these compounds actually do cause harm in the form and amount found in cooked dog foods, and research has identified potential benefits as well as risks to their consumption, so the assumption that cooked foods must be unhealthy because they contain MRPs is unreasonable.2

Similarly, the hypothesis that exposure to microorganisms during development can reduce the subsequent risk of allergies and other immune-system diseases is plausible, and there is some supportive evidence, though there is also evidence against this “hygiene hypothesis.”3-6 However, this does not justify the assertion that exposure to such organisms through eating raw meat, dirt, or other substances, has more benefits than risks.

A recent paper published in the Journal of Veterinary Internal Medicine (JVIM) purports to support claims for health benefits from raw diets.7 The authors suggest exposure to raw diets in puppies may reduce the risk of later development of canine atopic dermatitis (CAD), and exposure to conventional commercial diets may increase CAD occurrence in adulthood. There are, however, numerous limitations and red flags associated with this study, and it is not strong evidence.

The authors of the paper have a long history of promoting raw diets and various alternative therapies, and they have a clear bias on the subject.8-16 Of course, researchers often have confident beliefs, rather than tentative hypotheses, when they design and conduct scientific studies. It is well-established that “researcher degrees of freedom,” the amount of leeway investigators have in designing studies and in collecting and analyzing data, is associated with the likelihood of false-positive results.17

Given researchers with clear a priori beliefs about raw diets designed the survey, defined the variables of interest, and had total freedom to create and conduct the regression analysis, the results likely reflect the beliefs of the researchers more than the underlying reality of nature. 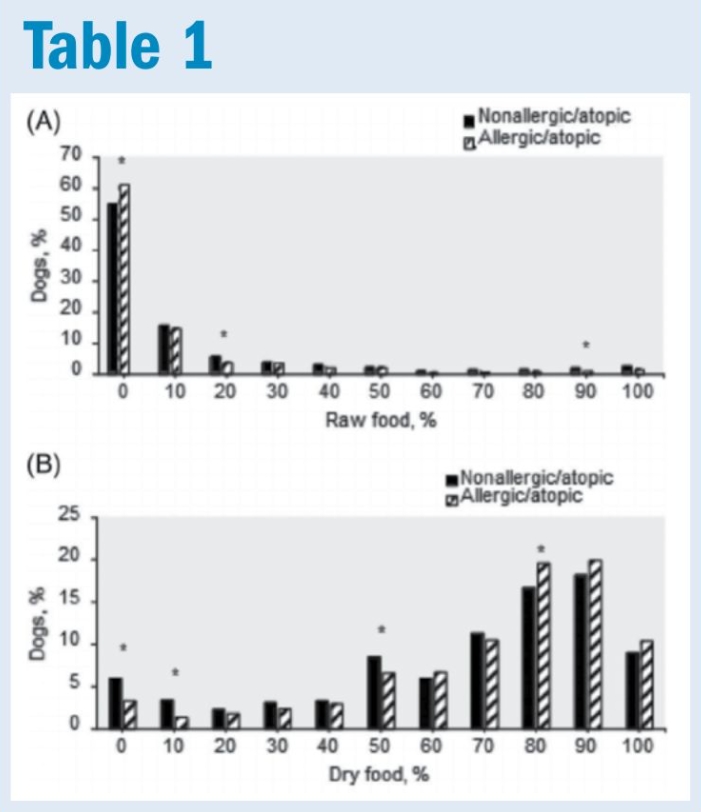 One example of the clear bias behind this study is in the terminology chosen for different diet categories. They divide foods into “non-processed meats/ingredients” and “ultra-processed carbohydrate-rich foods.” These are artificial categories reflecting the ideological bias of the researchers, not the reality of the kinds of foods dogs are actually fed.

“Non-processed” is meaningless unless the dogs are eating whole prey and plants they find for themselves. Likewise, the term “ultra-processed” is also an inappropriate extrapolation of terms used to describe human snack foods, which are not meaningfully similar to commercial pet foods. The label is a value judgment that implies a negative health impact not actually proven to exist.

Commercial canned and dry foods are also not accurately described as “carbohydrate-rich.” The carbohydrate content of commercial dry diets varies dramatically, as does the type of carbohydrate (from simple sugars to complex fibers). The nutritional value and potential health effects of commercial diets will vary greatly based on these differences, and lumping them all together in this artificial category is not a sound scientific approach.

Another potential influence on this study is funding bias. It is, again, well-established that funding sources can influence the outcomes of research, which is why disclosure of funding sources is required by scientific journals.18 In a web documentary called The Dog Cancer Series, one of the authors of this study herself cites funding bias as a factor in the literature concerning raw diets:

“[Raw food is] not really researched in universities. Most universities get sponsored by these big billion-dollar companies, and you don’t really want to step on their toes, I guess. But, I think that’s not really ethical,” says Dr. Anna Hielm-Bjorkman.19

It is relevant, then, to point out this study received financial support from raw diet manufacturers, as well as Dr. Joseph Mercola, an infamous proponent of alternative medicine and anti-vaccine activist repeatedly warned by the Food and Drug Administration (FDA) for promoting COVID-19 misinformation and selling unproven treatments.20,21 Given the potential for ideological and funding bias in this research project, the lack of rigorous controls for possible bias in this study is concerning.

The main source of data is an online survey available only in Finnish. This is a very narrow sample population, and it is unlikely to be representative of the views or practices of dog owners generally.

More importantly, the responses are simply expressions of the perceptions and beliefs of the owners who participated, not necessarily the nutritional and environmental exposures nor health outcomes actually experienced by the dogs. Self-reporting of diet and health information has been shown to be unreliable in humans, and it is unlikely to be more reliable among dog owners.22,23

Previous reports evaluating this source of data do not inspire confidence.2,15 The researchers validated responses by emailing respondents and looking for consistency in their answers to selected questions. In a previous study, only about 30 percent of the respondents replied to these emails, and almost 13 percent of responses to this survey tool were discarded as “robot” answers. Also, 26 percent of respondents provided inconsistent or discordant answers regarding diet and CAD symptoms.15

The current study reports 4.2 percent of answers were discarded as duplicates or robot responses, but provides no information on discordant responses. The report does indicate, however, 31 percent of the responses were discarded because an analysis of the foods reported indicated significant underfeeding.7

It seems more likely owners were misremembering their feeding practices rather than 30 percent of owners were dramatically underfeeding their dogs.

Asking owners to remember in great detail what they fed their puppy between two to eight months of age, and then trying to associate this with health outcomes years later, is a questionable strategy. With no direct or objective verification, it seems very likely the dietary and health information reported in this survey is unreliable.

The associations discovered during statistical analysis support this interpretation because they are often inconsistent and make no obvious sense in terms of the authors’ hypothesis that raw foods are protective against CAD. For example, why would raw tripe and organ meats be protective, but raw red meat, eggs, and poultry would not be?

If cooking is the main risk factor, why would cooked vegetables be protective and raw vegetables would not? Why would both cooked and raw eggs be protective while neither cooked nor raw poultry is associated with the likelihood of CAD? If exposure to bacteria is the main variable, why is eating dirt, sticks, or carcasses protective, but eating clay and grass is not, and drinking from puddles is actually associated with increased risk?

If excessive processing is the issue, why was there no association with eating processed meats or canned foods, and only a marginal association with dry food when it was the only food offered?

Additionally, the paper reports associations between the proportion of various foods fed and adult CAD risk that are hard to explain.

Control dogs were more likely to be fed 50 percent or less than 10 percent dry, but there was no difference at intermediate ratios. It is easier to see cherry picking and researcher degrees of freedom than a consistent dose-response in these results.

Identifying causal associations between nutrition and health outcomes is inherently difficult. Available feeding strategies involve many differences in nutrient form and content other than the narrow aspects we may choose to focus on, such as cooked versus raw.

It is worth conducting research to investigate such relationships, but strong evidence will always be scarce and difficult to produce. However, productive research efforts must involve meaningful attempts to control for bias and to obtain fundamentally reliable data, even when conclusions may always have to be tentative.

The authors of this study continue to publish papers suggesting health benefits to raw diets and risks to conventional diets based on a single online survey tool and a convenience sample of Finnish-speaking dog owners. This is never going to be a solid data set upon which useful conclusions can be based, and the research produced from it are more likely to be an expression of the beliefs and perceptions of the respondents and the researchers, rather than a sound representation of the complex relationships between nutrition and health.