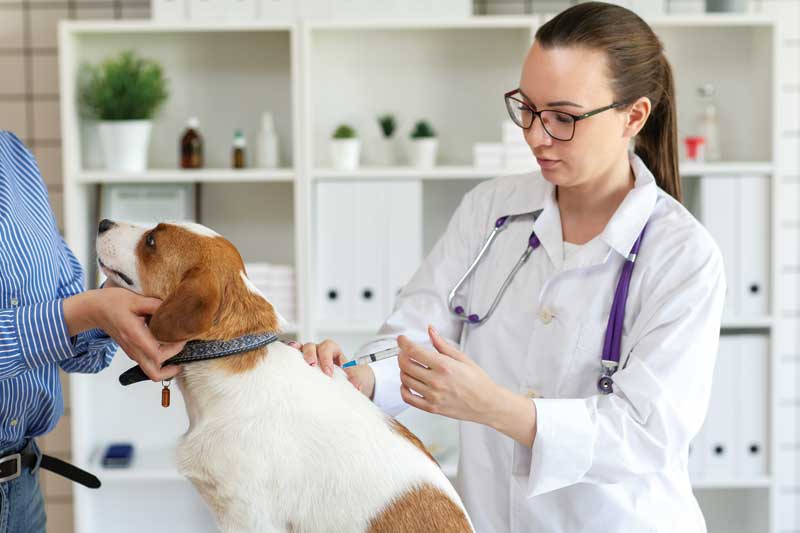 The COVID-19 pandemic has brought the return of a period many of us have never experienced, although it still exists in living memory—a time before vaccines, when medicine had little power to stop the spread of infectious diseases. The latter half of the 20th century saw a golden age of vaccinology, during which dozens of vaccines were developed to protect against the most lethal of these diseases. With scientists now racing at unprecedented speed to develop a vaccine against SARS-CoV-2, we can be hopeful this virus will soon join the myriad other microorganisms whose power over us has been brought to heel by vaccines.

There is another thread related to vaccines running through the COVID-19 story. It is one with which most veterinarians may not yet be familiar, although it could have important implications for the way the profession views and uses vaccines in the future. In human medicine, evidence has been accumulating that certain vaccines may have effects extending well beyond the specific protection they offer against their target pathogens. Epidemiologists have noticed that when these vaccines are introduced into new populations or younger age groups, they decrease overall mortality rates to a much greater extent than can be explained by a reduction in mortality due to prevention of a single disease. This led them to propose that some vaccines may have “nonspecific” protective effects against diseases caused by unrelated pathogens.1

In the absence of a specific vaccine, several teams of scientists around the world are now putting this theory to the test against SARS-CoV-2, going up against this new virus in trials with a live attenuated bacterial vaccine developed 100 years ago. Bacillus Calmette-Guérin (BCG) is an attenuated form of Mycobacterium bovis, the bacterium that causes tuberculosis in cattle. How could a vaccine against a bacterial disease in animals offer any kind of protection against a viral infection in humans? The answer may depend not only on what we thought we knew about vaccines, but also our understanding of a basic component of the mammalian immune system.

Randomized controlled trials of BCG given at birth to infants in Africa have shown a substantial reduction in overall death rates in children that received the vaccine, associated with a lower incidence of non-tuberculous infectious diseases, including cases of sepsis, respiratory infections, and fever.2-4 A trial in healthy male adults in the Netherlands showed the BCG vaccination conferred protection against experimental infection with the attenuated yellow fever virus vaccine.5 Other observational studies support these results.6-7 In veterinary medicine, a formulation containing cell wall components from M. phlei was reported to reduce the severity of Enterotoxigenic E. coli- (ETEC-) induced diarrhea in neonatal calves8 and to decrease all-cause morbidity in feedlot calves.9 Although vaccines are traditionally supposed to work through their interaction with the adaptive immune system and the development of immune memory, scientists think it is the innate immune system that holds the key to BCG’s nonspecific effects.

Until recently, it was thought the mammalian innate immune system—comprising white blood cells such as macrophages, natural killer cells, and neutrophils—had no memory. But scientists have discovered that stimuli such as BCG can induce a heightened response of the innate immune system over a prolonged period to subsequent, unrelated infections, a phenomenon they have termed “trained innate immunity.”10 This effect appears to be mediated by epigenetic reprogramming of innate immune cells as well as metabolic shifts in these cells that enhance responses.

Measles-containing vaccines have also been shown to reduce overall death rates more than can be explained by prevention of measles alone. In the body, measles virus destroys populations of immune memory cells established through vaccination or natural exposure, leaving victims vulnerable to subsequent infections to which they were previously immune.11,12 Much of the effect of the measles vaccine on overall death rates may be due to the prevention of these infections, a so-called “downstream effect.” However, scientists have not ruled out a direct beneficial effect of the vaccine on the innate immune system, similar to BCG. With its close similarity to measles virus, it is plausible that canine distemper virus—and its vaccine—has similar effects in dog populations; that is, vaccination against distemper may provide protection against other diseases. More research is needed to determine if this is the case, and to understand the mechanism of any effect.

In addition to the BCG and measles vaccines, two other human vaccines—smallpox and oral polio vaccine—have been associated with protective effects against unrelated infections.13-14 Common to all these vaccines is the fact they are live attenuated vaccines. Another intriguing feature of the nonspecific effect of these vaccines is that it differs by sex. The beneficial effect on overall survival rates is generally greater in females than in males. The reason for this is not clear, but it may be related to the fact that in people, as in other animals, females typically generate a better immune response to vaccines than males.15

But there is another side to the coin of the theory of nonspecific effects of vaccines, one that is distinctly less shiny. The same epidemiologists who noted the greater-than-expected beneficial effects of live vaccines on mortality rates also noticed another phenomenon: when certain non-live vaccines are introduced into populations, they are followed by an increase in overall mortality rates. This effect also seems to differ substantially by sex, with the detrimental effect being greater in females. This has mainly been reported for diphtheria-tetanus-pertussis (DTP) vaccine in children in developing countries;16 however, safety data from large-scale clinical trials of the malaria vaccine candidate (RTS,S/AS01) show the same pattern of an increase in female mortality rates among vaccinated children.17

There is currently a lack of scientific consensus on the topic of detrimental nonspecific effects of non-live vaccines. A review in 2014 by a working group of the World Health Organization’s (WHO’s) Strategic Advisory Group of Experts (SAGE) on immunization concluded the evidence was unclear because the studies that reported it were at high or very high risk of bias.18 An updated review published in 2016 concluded receipt of DTP was associated with a possible increase in all-cause mortality; however, these studies were still considered at high risk of bias, and the review indicated a need for further randomized controlled trials.19 The use of Mosquirix is being limited to pilot implementation in only three African countries, in part to evaluate safety concerns in girls.

Nonspecific effects of veterinary vaccines have not been investigated to the same extent as those of childhood vaccines. One study found that, in contrast to reported beneficial effects of live BCG vaccine in children, a heat-inactivated M. avium subsp. paratuberculosis vaccine exacerbated the pathological and inflammatory effects of experimental Actinobacillus pleuropneumoniae infection in piglets, with an indication that female piglets were more severely affected, although only a relatively small number of animals were involved in the study.20 My coauthors and I recently reported results of a randomized controlled trial of rabies vaccine in dogs at six weeks of age from a high-mortality dog population in South Africa in which we found the vaccine substantially increased female, but not male, mortality rates over the subsequent seven weeks when compared to a placebo injection.21 In this owner-blinded study, vaccinated females had a three times higher risk of death from any cause compared to unvaccinated females. This is similar to the pattern reported for the DTP and RTS,S vaccine in children, but it is in contrast to reports of the effect of the human rabies vaccine, which we previously associated with a protective effect against meningitis and cerebral malaria in children in Africa.22

Although all are inactivated cell-culture vaccines, animal and human rabies vaccines differ in one important regard. Animal rabies vaccines contain alum-based adjuvants, while human rabies vaccines do not contain any adjuvant. Although the safety of alum-based vaccines has been demonstrated for expected adverse events occurring within a short time after vaccination, alum adjuvant has also been shown to suppress Th1-type immune responses.23 We suspect this immune suppression may leave females more vulnerable to certain other infections. In human or animal populations with a high incidence of these infections, this would manifest as an increase in female mortality rates.

You May Also Like  Why euthanasia will never be the same

Disentangling cause and effect is particularly challenging when studying vaccines that are in routine use. Cohort studies may struggle to control for confounding factors, variables that are “common causes” of both vaccination status and survival outcomes. For example, in many settings, only healthy children will receive vaccines on schedule, and, as a result, will be at lower risk of death anyway. In veterinary studies, owners who vaccinate their animals may be doing other things that decrease the risk of severe illness and death, including other prophylactic therapies or improved nutrition. Studies with these flaws would systematically overestimate the beneficial effect of vaccination on survival.

Studies updating vaccination records retrospectively would produce similar overestimates, if owners whose animals are alive at the time of the update are more likely to report a positive vaccination status for those animals, compared to those that have died. This may happen in situations where the vaccine is a legal requirement and owners may be concerned about repercussions. Observational studies (including a previous study of ours24) may be at risk of these types of biases, hence the need for prospective randomized controlled trials.

Evidence of detrimental nonspecific effects of vaccines on survival are largely limited to populations with a high incidence of infectious and parasitic diseases, and effects in populations in which these diseases are well controlled are likely to be much less pronounced. As COVID-19 has reminded us, the benefits of vaccines still far outweigh the risks, and it is likely these benefits will be extended as we learn how to harness protective nonspecific effects of existing vaccines against unrelated diseases and for which we do not have effective therapies.

You May Also Like  Employee-employer reviews: The truth is out there

Darryn Knobel, BVSc, MSc, MRCVS, PhD, is director of the Research Center for Conservation and Ecosystem Health and professor of epidemiology and population health at Ross University School of Veterinary Medicine. Dr. Knobel grew up in South Africa and received his veterinary degree from the University of Pretoria. He has focused his career on enhancing knowledge of the epidemiology of rabies in free-roaming dog populations in resource-poor communities, and in applying this knowledge to improve the health of dogs and the communities in which they live. He has conducted this work in several different countries including South Africa, Tanzania, Kenya, and Ethiopia. Knobel has published more than 50 papers on the topic of rabies and other zoonotic diseases in animals and people. He holds an adjunct appointment with the Department of Veterinary Tropical Diseases, Faculty of Veterinary Science, University of Pretoria.