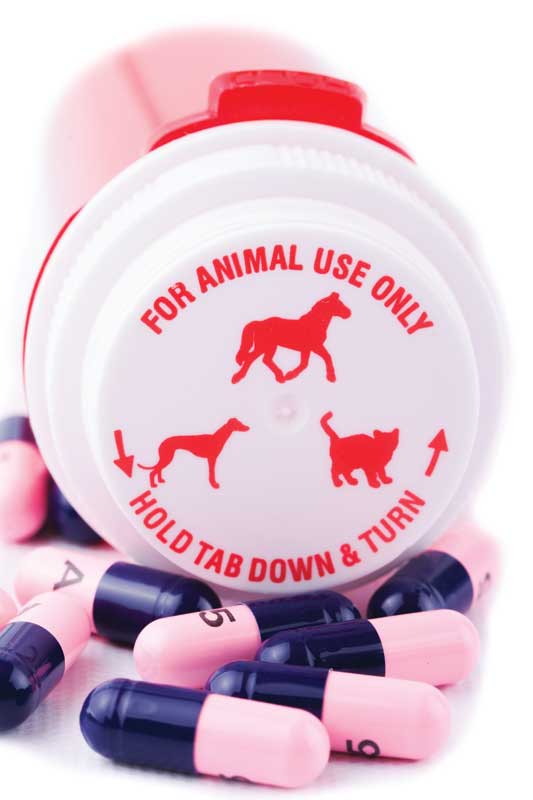 The female pit bull had a tough-chick approach to life: Be aggressive first; ask questions later. Her owner was a dog trainer and had taught her well as far as obedience training, but the dog was aggressive toward other dogs in the home and toward some humans.

The owner took the dog to Patrick Melese, DVM, DACVB, at Veterinary Behavior Consultants in San Diego, who prescribed fluoxetine, a selective serotonin reuptake inhibitor (SSRI), and made recommendations for management and behavior modification.

“This dog responded very well to the first treatment,” he said. “Fluoxetine usually takes somewhere between one to four weeks to have a clinical effect. This dog responded within just a few days. She’s a really sweet, lovable dog when she is on her meds.”

Medication is by no means a quick or standalone fix, but it has an important role in helping pets and owners dealing with problems such as separation anxiety, noise or storm phobias, self-mutilation, aggression toward humans or other animals, and more. Combined with management and behavior modification, the right drugs can help animals make better and more rapid progress.

“Medications can help ‘normalize’ the brain chemistry and facilitate a more ‘true’ processing of information, just like they do in people,” said Terry Curtis, DVM, DACVB, clinical behaviorist at the University of Florida’s department of small animal clinical sciences.

Current psychoactive medications for dogs and cats are prescribed based on what is known about their effects in humans.

“In veterinary medicine, we focus more on serotonergic neurons, which help modulate mood and behavior,” said Wailani Sung, DVM, DACVB, at the San Francisco SPCA Behavior Specialty Service. “They are found in high density in the frontal cortex and hippocampus, areas of the brain involved in learning.”

While all of the nervous system “hardware” such as the brain and spinal cord as well as the “software”—the neurotransmitters—are the same in humans, dogs, and cats, one primary difference in the effects of medications is how they are metabolized. Pets may need a higher or lower dose or a higher or lower frequency of administration, Dr. Curtis said. And sometimes, she added, medications used in humans don’t work at all in pets or have harmful side effects.

SSRIs such as fluoxetine (Prozac), paroxetine (Paxil), and sertraline (Zoloft) help address and decrease anxiety and reactivity. Dr. Melese said SSRIs are commonly used in veterinary medicine because they generally hit the mark and have few side effects.

You May Also Like  What is the best way to clean your OR?

Tricyclic antidepressants such as amitriptyline and clomipramine may be used to treat anxiety, aggression, and compulsive disorders. Benzodiazepines such as alprazolam (Xanax) and diazepam (Valium) may be used for thunderstorm and noise phobias. Other medications used alone and in combination with the above drugs are buspirone, clonidine, and trazodone.

Three drugs are FDA approved for treating behavior problems in dogs. One is Clomicalm, for separation anxiety. Sileo, launched in 2016, is used for noise aversion. Anipryl (selegiline) may benefit dogs with cognitive dysfunction, and some veterinarians prescribe it off-label for cats with cognitive dysfunction, with owner consent. Adverse drug reactions can occur if Anipryl is used concurrently with SSRIs or tricyclic antidepressants.

What to watch for

“Many of the side effects are dose dependent, so dosing the medication correctly is very important,” Dr. Curtis said.

When, how to prescribe behavior drugs

Drugs alone are not how behavior problems are best treated. Possibly the sole exception to this rule is urine-spraying cats, Dr. Melese said.

“Many of us in my specialty would agree that this is the one area where just a medication may be sufficient without a comprehensive treatment plan,” he said. “That is important to push out to general practitioners because a lot of these cats may lose their lives if untreated.”

Otherwise, a behavior plan should be paired with medical treatment. In fact, Dr. Melese said, when the FDA approved Clomicalm and Reconcile for separation anxiety, the drugs both were labeled to require a behavior plan along with the medication.

Behavior problems can stem from stress, emotional conflicts, genetics, medical conditions, or the home environment. Before prescribing any behavior medication, rule out a medical cause and take a thorough history.

For instance, spinal and neurologic diseases can trigger repetitive or compulsive behaviors because animals experience changes in sensation such as a pins-and-needles feeling or a sensation of constant itching. This may cause the animal to self-mutilate.

You May Also Like  Treating pain without pain medications

A thorough history should include information about the animal’s environment, exercise, diet, training, and interactions with other animals as well as the humans in the household. Some behavior problems are idiopathic, and no amount of sleuthing can uncover the cause.

Work with owners and, if possible, a veterinary behaviorist to come up with a management and behavior modification plan. Environmental changes may be necessary.

“I try to make the treatment plan as easy as possible,” Dr. Curtis said. “It’s about having the client understand how dogs and cats learn and how those simple principles apply to their pet’s particular problem. It has to be a plan the owner feels comfortable enacting, or the pet won’t benefit.”

Medical therapy typically requires a minimum of three to six months. It can take several weeks for some medications to reach peak effect. Concurrently, owners must manage pets on a daily basis to increase safety and reduce the opportunities pets have to exhibit inappropriate behaviors.

“I like to see a few months where behavior is good and steady before weaning the pet off,” Dr. Curtis said. “By weaning off slowly, over weeks or months, we may find that the pet can be off it entirely, or we may find that they need to be on it but at a much lower dose.”

If clients discontinue medication suddenly, the result can be a rebound effect of the behavior. Sometimes the rebound behavior is far worse than the original behavior, Dr. Sung said.

Dr. Melese’s pit bull patient is an example of what can happen when owners forget to give medication, run out, or purposely take the pet off the drug. The owner was traveling frequently and ran out of medication. The dog began reverting to her previous behavior. The unintended medication vacation showed that the drug had been making a dramatic difference in the dog’s behavior.

As with any drug, not every medication is right for every pet. Finding what works may require some intelligent trial and error, Dr. Melese said.

“As I tell my clients, give us 30 years and when we have your dog’s genome as he walks in the door we will be able to nail exactly what medication will hit that mark, but we are not there yet,” he said.