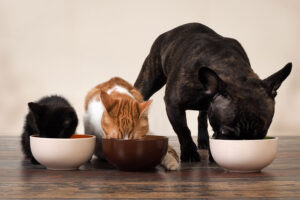 A study by Canada’s Ontario Veterinary College (OVC) has found 35 percent of pet owners are interested in feeding their pets vegan diets.

Conducted in collaboration with researchers in New Zealand, the international online survey of 3,673 dog and cat owners looked at what kind of food they fed themselves and their pets.

Of the 35 percent of owners, 55 percent said they would require proof a vegan diet would meet their pets’ nutritional needs, would want endorsement from their veterinarian, and would want the pet food to be easily available.

“While only a small proportion of pet owners are currently feeding plant-based diets to their pets, it is safe to say interest in the diets is likely to grow,” says lead author, Sarah Dodd, currently a PhD candidate at OVC’s department of population medicine. “People have been hearing about how vegan diets are linked to lowered risks of cancer and other health benefits in humans.”

In total, 1.6 percent of the 2,940 dog owners and 0.7 percent of the 1,545 cat owners surveyed said they fed their pets a vegan diet. Further, 10.4 percent of dogs and 3.3 percent of cats were found to have been fed vegetarian and plant-based diets occasionally.

According to Dodd, it is unclear whether there are any health benefits or risks involved with vegan diets in pets. “This study shows there is a clear need for further research in this area,” she adds.