People are finally getting summoned back to work and they are really ready. Their dogs? Some won’t cope with being alone. They’ll become frantic, destructive, house soil, and then get wildly exuberant when their person finally returns. Separation anxiety is a serious drag on the wellbeing of pets and the individuals who struggle to care for them. Let’s be ready.

These are big problems. It’s estimated 80 to 90 percent of separation anxiety cases go undiagnosed. That’s a lot of untreated misery, but it’s not because anybody has missed the splintered door frames. Dogs that paced, licked their lips and yawned, got up, lied down, and repeatedly checked the windows had kept their subclinical hysteria a well-guarded pre-pandemic secret. Stay-at-home orders during the past year felt like a godsend to these dogs. Many will exceed their threshold for panic when their people march back to the office.

Pearl is a two-year-old spayed female Australian shepherd. She’s a sweet, loving, and well-mannered dog who has torn her way out of two crates, dug through the carpet all the way to the concrete, destroyed doors, and ripped down window blinds. Her owner calculated “she could do $1,000 worth of damage in no time.” Left outside, Pearl escaped the fenced yard. My clients felt they had little choice but to take her with them everywhere they went.

In her paper, “Separation anxiety in dogs: What progress has been made in our understanding of the most common behavioral problems in dogs?”, Niwako Ogata, BVSc, PhD, DVM, DACVB, points out, “Any benefit of living with a dog can quickly diminish when pet dogs engage in undesirable behaviors that damage the human-animal bond. These dogs often end up relinquished and may or may not find a new home.”1 We took an oath to use our scientific knowledge and skills for “the protection of animal health and welfare, the prevention and relief of animal suffering.” Well, here is yet another opportunity.

I told Pearl’s people their dog was a lovely girl who was fortunate to have landed in their home. To derail any perception her behavior disorder was their fault, I explained separation anxiety is often genetic in its origin. With repetition of their predeparture routine, their dog had been conditioned to rising agitation as her leaders prepared to leave home. Our long-term goal was for Pearl to abandon this unhealthy association and actually look forward to a new daily structure.

You May Also Like  Separation anxiety: Treating dogs in the wake of COVID-19

Crates are a common tool for protecting carpets, doors, and furniture, but incarcerating a panicked dog is, indeed, a formula for disaster.

During one desperate escape attempt, Pearl fractured her right upper canine tooth, painfully exposing the root canal. I referred her to a veterinary dentist and gently explained confinement in a barren enclosure worsens isolation and anxiety. Trazodone, a popular remedy, can be one component in a treatment plan, but dogs like Pearl need a lot more.

Clients should know some dogs do well but even those who improve by leaps and bounds may never be far from losing their grip and tearing the window blinds into tiny shadows of their former selves. Noise phobia, commonly comorbid with separation anxiety, can also upset whatever tenuous control has been achieved.2 Sometimes, we’re at a loss to explain a sudden unraveling of hard-won progress.

Empathy for a badly unsettled client is an essential starting point. It takes only a few seconds to say we understand. People can lose control and mete out punishment when discovering the desecration of yet another family heirloom. Our compassion can temper their frustration. We could be judgmental, but we can only reduce an animal’s suffering by summoning its owner’s dedication to the cause. Regardless of how badly they’ve screwed it up, we shift the focus to treating the problem.

Pearl deserved choices. When she got nervous, she needed to be able to change locations to feel better. A dog door would help, but an outdoor run can be as problematic as a crate; this girl required the entire yard and then some. When her folks worked at home she could keep calm outside but she had jumped the fence after they’d left. Until this nervous Nellie made significant progress, daily doggy daycare was the only responsible short-term plan.

A thorough physical exam and lab profile, including a fecal and urinalysis, are essential to identifying every factor affecting a behaviorally disordered pet. Joint or dental pain, pruritus, LUTI, and GI discomfort are known contributors to anxiety and elimination behaviors. Best results come with thorough medicine.

Video of Pearl during the first five to 10 minutes after a typical departure was really valuable. So we could gain a better understanding of Pearl’s distress, I instructed her owners to exit without a word, drive to Starbucks, and return as though they had no dog. Weekly video monitoring showed when adjustments in medication and management were needed. During work breaks at the office, Pearl’s people used their surveillance system’s smartphone app to verbally encourage their girl to relax and return to her stuffed food toy.

You May Also Like  Three trends to reinvent your hospital 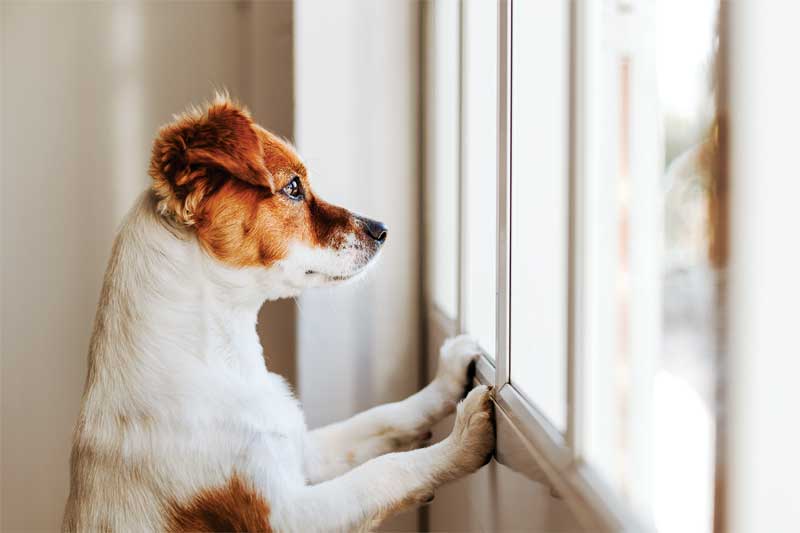 Anxious dogs need a reliable structure. Every day Pearl’s leaders were to get up, let her out to eliminate, feed her, and then take her for a walk whether or not it was a workday. Vigorous exercise lowers anxiety, but a dog who watches her people getting ready to leave can ratchet her arousal back up again. I counseled Pearl’s folks to avoid this trigger by getting dressed for work in another room and, ideally, leaving their house unseen.

Dogs are genetically programmed to forage for their survival, not gorge from a bowl and then fret the rest of the day. Convince your clients to provide all sustenance from food-dispensing toys and puzzles, dropping these treasures as they depart with zero fanfare. Silently picking them up on their return makes it clear to their dogs being alone means it’s time to find food.

At the beginning Pearl was so anxious that her appetite evaporated when she was left alone. I needed to set her up to succeed. Fluoxetine (0.5-1.5 mg/kg sid) or clomipramine (2-4 mg/kg bid) are often effective as primary/everyday anxiolytics. As an adjunct, trazodone (1-5 mg/kg bid or prn) can be given two hours prior to departures so it’s on-board before anxiety winds-up. Clonazepam (0.1-1 mg/kg; duration six to eight hours) has been a helpful add-on in some cases. Acepromazine does little to control anxiety.

A pulsed electromagnetic field device called the Calmer Canine has made a difference for many dogs. A proactive client can start these safe, twice-daily treatments four to six weeks ahead of their return-to-the office date. An Adaptil pheromone diffuser promotes a calm emotional state. Videos while Pearl was alone showed that relaxing music called “Through a Dog’s Ear” further reduced her restlessness.

Behavior modification has an important place in teaching a nervous dog that being alone really isn’t catastrophic. I instructed Pearl’s owners to desensitize her to their predeparture cues by occasionally handling their keys and touching their briefcase or purse—always below their dog’s threshold for anxiety.

Independence training and graduated absences have helped some pets abandon their fear of being alone. It takes a special person to commit to these time-consuming and repetitive exercises.

You May Also Like  Does your client experience need a redo?

Pearl ended up doing very well, due largely to her owners’ commitment. She became comfortable staying in her fenced yard, making no attempts to escape. With some trial and error, we reached her optimal medication dosages. Her owners reported, “She remains placid for 12-plus hours” while they were away at work.

We want our clients to recognize the need for improvement in their pets’ welfare. A great value-added service would be to invite them to bring a brief surveillance video to their annual exam appointment. You will notice the increased respiratory rate, pupillary dilation, hypersalivation, inappetence, or excessive licking that may be missed by your clients. They want a peaceful life for their pets. We have the skills to make the difference.

Veterinarians are full of good intentions but we have to be real. Giving quick advice on fixing a dog’s $1,000-a-day sheetrock demolition habit won’t make a real difference. A thorough one- to two-hour consultation can set pets and the people who love them on the path to a better life.

Charge for your time and expertise. A service is valued in direct proportion to the sacrifice that is necessary to obtain it. Staying late and giving it away by phone will yield little; people with skin in the game demonstrate better compliance. If you are ready with a cogent explanation of how you can help a badly distressed dog feel better and behave well, many clients will get on board and share our commitment.

Jeff Nichol, DVM, did his undergraduate studies and graduated from veterinary school at Michigan State University. He has been a veterinary hospital owner, and has practiced general and behavior medicine throughout most of his career. Dr. Nichol completed his residency in behavior medicine through the American College of Veterinary Behaviorists in 2015. His current practice, located in Albuquerque, N.M., is now limited to the diagnosis and treatment of behavior disorders of pets. Medical comorbidities are a common feature in his caseload.

1 Separation anxiety in dogs: What progress has been made in our understanding of the most common behavioral problems in dogs? Niwako Ogata, Journal of Veterinary Behavior 16 (2016) 28-35, Elsevier